Zombies on a plane 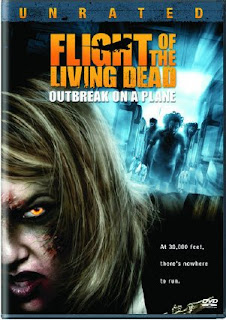 OK, it's 1AM and I really should be in bed, but I really need to blog this. I just got done watching, I shit you not, Flight of the Living Dead. You read that correctly. Not NIGHT of the Living Dead, FLIGHT of the Living Dead. As it turns out, I have rented so many zombie movies from Netflix, they have started recommending zombie movies to me. Last night, while I was trying to decide what to get from Netflix next, I came across that little gem in my recommendations. I'll admit it, I was powerless to resist it, based almost entirely on the title alone.

This movie hardly needs a plot summary, but the bottom line is zombies (the fast kind) wreak complete and utter havoc on a 747 bound for Paris. The index case is explained via some completely laughable (and ultimately unnecessary) reason having to do with the malaria "virus." (Hello! Malaria's not caused by a virus!) Once you get that out of the way, along with some back story set-up for various passengers, it's nothing but flesh eating nastiness for 96 minutes.

I am happy to report, that like Freddy vs. Jason, Alien vs. Predator and Severed: Forest of the Dead before it, this movie is so much better than any movie named Flight of the Living Dead has any right being. Honestly, I was expecting something that would qualify for Up All Night with Rhonda Shear on USA Network back in the day. The zombie effects are very good, especially for a movie that went straight to DVD. It is littered with no name actors that actually turn in some pretty good performances. The only actor that was familiar to me was Kevin J. O'Connor, who I recognized from The Mummy.

Taking several cues from Snakes on a Plane (which I also enjoyed in spite of myself), it managed to take the zombie genre in a direction that I'm not sure anyone else has taken it. Sure, the zombies on the ground are scary, but you can always run away and hide. What are you going to do when you're stuck on a plane? You're pretty much screwed. But while Flight of the Living Dead put a new spin on the undead, it also respected the zombie rules. This made me very happy as nothing pisses me off more than a zombie movie that does not know the rules. And what's the most important zombie rule? All together now..."Kill the brain, you kill the ghoul."

Watching this movie tonight also renewed my desire to someday, somehow be a zombie extra in a movie. It doesn't even have to be a big budget movie! It can be someone's home movie for all I care. As it stands right now, my only hope is to have a Halloween party and invite people that would want to dress up like zombies with me.

Not sure if that will ever happen.

This movie is highly recommended to any fans of the zombie genre. It has a healthy respect for zombies but is also not afraid to go in new directions. Totally worth a Netflix rental. Now here's hoping that I can get Alien vs. Predator 2: Requiem next. I must truly be a glutton for punishment.
Posted by Dan at 4/17/2008 01:02:00 AM

The title alone wins me over. I'm going to have to check it out.