Depressing with a capital D (for Dolly) 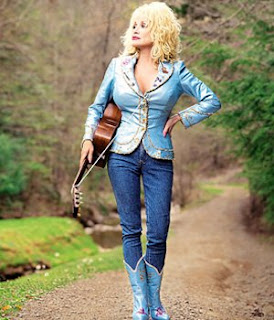 I'm gearing up for the Dolly Parton concert in Minneapolis in just over 2 weeks. Getting ready for a concert is always such fun as I usually just immerse myself in the artist's music. This has proven to be no exception. Dolly is sure to be my #1 artist this week on last.fm and I noticed today that she was the third artist on my overall artists chart to crack 1,000 plays.

One of the things I love about Dolly is her songwriting. People that can write songs amaze me because I don't have a single shred of that talent. If I ever tried to write a song, it'd probably be about 25 seconds long and would likely sound like something already out there. But part and parcel with Dolly's songwriting is the depressing nature of many of her songs. She said on a live album released a few years back, "They say in Nashville, if you're gonna be a songwriter and you're gonna write songs, if you wanna have a hit--make it hurt!" I got to thinking about which of Dolly's songs really fit that bill for me. And I came up with a few.

The 5 Most Depressing Dolly Parton Songs

1) Down From Dover
You know, it's weird, but Dolly really has a disproportionate number of dead baby songs. This is the best "baby born dead" song ever. Dolly is a young unwed mother whose boyfriend has left her but promised that he'd be coming "down from Dover" before the baby is born. She's pretty much disowned by her family and, naturally, the baby's father never comes down from Dover. She has the baby, but "something's wrong, it's much too still/I hear no crying."

Sample lyric:
I guess in some strange way she knew
She'd never have a father's arms to hold her
And dying was her way of telling me he wasn't coming
Down from Dover.

2) Dagger Through The Heart
Although it could easily be lumped into one of a million "love gone wrong" country songs, this one really is, well, a dagger through the heart. The kickoff single from Halos and Horns (even though Dolly had long since been dropped like a hot potato from country radio), even though the song wasn't a hit, it really hurt. The video is classic, basically just a one shot of Dolly singing into the camera, but really, the minimalistic nature of the video suits the song well.

Sample lyric:
Oh, I know I'm a fool to keep stayin'
When you've made hurtin' me such an art,
Tossed around like a used box of crayons,
It's like a dagger through the heart

3) In The Good Old Days (When Times Were Bad)
Although it is tempting to mistakenly assume this song is about my high school years, this one is, as so many of Dolly's songs are, about her childhood in the Smokey Mountains. Probably the least depressing of all the songs on this list, because even Dolly found that the crap she went through living with some of the poorest people in the country had a silver lining. As she sings, "No amount of money could buy from me/The memories that I have of then/No amount of money could pay me/To go back and live through it again." Are you sure this song isn't really about Carroll High?

Sample lyric:
We'd get up before sun-up to get the work done up
We'd work in the fields till the sun had gone down
We've stood and we've cried as we have bristly watched
A hailstorm a' beatin' our crops to the ground
We've gone to bed hungry many nights in the past
In the good old days when times were bad

4) Daddy's Moonshine Still
God this song actually cracks me up, so it's probably out of place on this list. But truly, if you took it at face value (as opposed to how I do, which is completely tongue in cheek and fully appreciative of its camp value), this song of Dolly's daddy's illegal bootlegging operation redefines "dysfunctional family." Whether she's washing out the Mason jars, hiding the brew when the feds show up or ultimately leaving home for the world's oldest profession (presumably), it's all equally awful. Fortunately, I'm pretty sure that this song is NOT autobiographical.

Sample lyric:
My bootlegging daddy was known quite well
And he made our home a livin' hell
And I ain't forgot it and I know that I never will
My mama finally died she just gave up
And daddy finally died from drinkin' that stuff
And bad memories haunt the rest of us
From daddy's moonshine still

5) Letter To Heaven
This is a very obscure Dolly song, but I think it is probably one of the most emotionally wrenching Dolly song I know. Much like I felt at the end of The Mist, the first time I heard this song, I felt like I had been emotionally abused by the song. The gist of it is a grandfather is mourning the death of his daughter and is writing a letter to her in the great beyond. His granddaughter (the daughter of the dead lady in the song) climbs up on his knee and asks him to write "tell mommy I miss her" or something like that. Anyway, the grandfather puts it in an envelope and stamps it and gives it to the little girl to put in the mailbox across the street. She goes out to do it and gets CREAMED BY A CAR that speeds away.

Sample lyric:
She was crossing the street to the box o'er the way
And when she stepped out never looked either way
A big auto hit her and sped away fast
The little girls prayers had been answered at last.

Let's not forget that Dolly is an amazing songwriter, but she also has an impressive rack!

Oh I reallllly do hope she still gets to bring her show down under. My BF Ben & I have been working ourselves into a spin of excitement simply at the suggestion she'll come here to perform. I can only imagine how nuts we'd go once she DOES.