Jabba - no match for Anna

So tonight I finally managed to open the Battle at Sarlacc's Pit game that I found at my folks' house over the weekend, thinking that Anna might enjoy playing it. I opened it up and I about fell over dead from shock when I found out that it was not missing one single piece. This is truly amazing considering how we treated our toys as kids. That is not to say that we were careless with them, but rather they just REALLY got played with.

It was, however, missing one very important piece of information: the directions for gameplay. Since I haven't played the game in probably 25 years, I hadn't any idea as to how to play it. A little inventive Google searching led me to this page, which had a pdf of the rules. With that, we were set to go. At least Anna was. 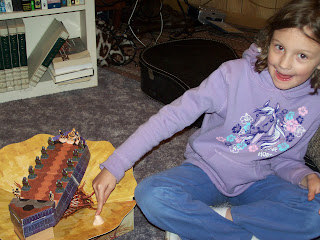 Get a load of the Jabba piece they have in the game. There's a lot on the web about how crappy the game pieces are, and they aren't kidding. Jabba looks like a snail or something. 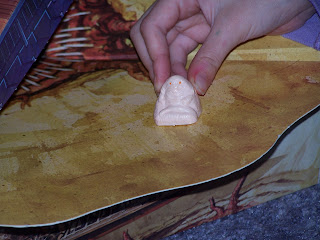 Gameplay is incredibly easy, mostly having to do with number cards and "Force" cards, etc. I guess for a game geared at ages 7-12, it can't exactly be chess. Basically the idea is to knock all everybody into the Sarlacc Pit. As one review I found online said, anyone who can't find the fun in that needs to get out more often. You have to kill all the Gamorrean Guards first, then Boba Fett and Nikto before you get a shot at Jabba. 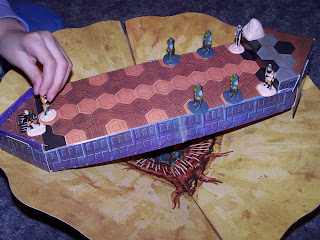 Naturally, Anna kicked my ass both times we played. I was nothing but Bantha poo-do to her. The Hutt was no match for her. Witness.