The future is this moment

I had plans for several more blog posts this weekend. But here it is, Sunday night, and that's obviously not going to happen. So you'll have to settle for a catch-all post.

Anna had her very first equestrian event today at Canterbrooke Equestrian Center here in town. She has been taking lessons for at least a couple years now, but changed instructors last fall. This is the first year that she's really had enough skill to be in a show, and she was VERY excited about it. We got there at 8:15 this morning and, while Anna was on her practice walks on the horse, another horse got off of its tie and ran free. This agitated all the horses in the area, including the one that Anna was riding which started trotting off. Fortunately, Anna had the sense to get it under control, but the instructors in the area were of great help. There's nothing like seeing your kid on a spooked animal and being completely unable to do anything about it. She recovered pretty well, and it taught a valuable lesson about how sometimes, when you're scared, you just have to go through it anyway. Here she is, doing her best "Madonna-from-the-first-set-of-the-Confessions-Tour" (well, sort of.) 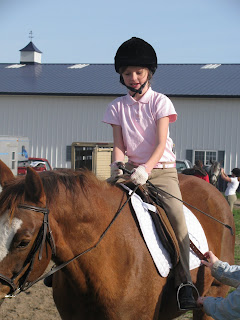 Heidi is going to have a table at Capital City Pride this year (June 12th/13th) - representing not just her own books but the whole of Dreamspinner (they paid the table fee!) There's a good chance that another Dreamspinner author will be coming in for the weekend as well, so it should be a good time. Between now and then, we probably should figure out how to procure a tent (Jeff tells me that Sam's Club should do the trick) and we'll have to order some more paperbacks of Heidi's three books (4 by the time Pride gets here.) Anyone in the area is encouraged to come out (no pun intended) and see us! We'll be there both Saturday night and Sunday during the day.

In related news, I was looking for a good shirt to wear to Pride this year. I determined it would be SO much easier if I were actually gay. The shirts that I've found on various web sites are just great. There are so many I would wear, but they just don't apply. I'm a bit annoyed by the "Not Gay (But Supportive)" T-shirt because I feel like it makes too big of a deal out of not being gay. Ultimately, I'll probably settle on something like this or this. Because you know, you can't wear just anything to Pride. I will admit to being slightly attracted to this one, but bromance is so last season.

I have the week of April 26th off of work and it can't come quickly enough. I'm going to play at being my father that week and try to get one little house thing done each day. Nothing big, nothing earth-shattering, but something each day. We're also going to be heading to Iowa City that week to see my sister and the Daddy-Daughter dance is that weekend as well. I'm sure there will be news to report from that.

As I mentioned on Twitter this weekend, I was in the mood to search through my heavily archived Gmail and I put in the search term "TMI." This brought up some amazingly funny results, both in e-mails I sent and in ones I have received from friends. I tell ya, there's a reason I archive everything and delete nothing.

I was doing up dishes tonight and the old Tina Turner song "Paradise Is Here" came on - I hadn't heard that song in forever. It was the live version from Tina: Live In Europe which I have always preferred to Break Every Rule version. There's an energy about the live performance, even though it's a ballad. More recently, Cher's version from It's A Man's World has co-opted Tina's version in my brain. I have no idea if Tina did the song first (I have a feeling that someone else did it before her) but for years, I thought hers was the only version out there. It was a late (and poorly charting) single from Break Every Rule, and up until tonight, I thought the only video out there was the live one (embedding disabled, rat bastards.) Not so.

The future is this moment, and not someplace out there. Words to live by.

I REALLY like the "Support Love" t-shirt! I'd go for that one.