So the first day of my time off hasn't been as productive as I would have liked. Granted, it's only 1:00 and I can turn that around pretty quickly. But mostly, I've been content to sit around in front of the TV, which is odd for me because I so rarely do it. The show I've been spending my time with today is the unlikeliest of candidates - the late 90s Saturday night drama Early Edition.

Early Edition has a very simple premise - regular guy Gary Hobson (Kyle Chandler) gets a copy of the Chicago Sun-Times delivered to his door every morning. The catch is that it's tomorrow's paper. He spends most of each episode going around trying to change the bad headlines before the day is out. I always kind of liked this show, although I have to say that I rarely ever watched it. Mostly, I just watched it sporadically if it happened to be on, never deliberately tuning into it. Even by 1997-98, being devoted to a TV show was quickly becoming a thing of the past. I'm not sure how or why that happened, but somewhere along the way, I decided I just couldn't be bothered with remembering when a show was on TV and that pretty much continues to this day. The big exception to this is Glee, and that's because there's three of us remembering when that show is on. So more often than not, I missed it even though, as I said, I did really like it when I watched it.

Thanks to the brilliance that is TV on DVD, I finally have the chance to rewatch all these old shows that I just didn't watch back then. And after watching three episodes of Early Edition this morning, I realized that I had actually underestimated my fondness for this show and also marveled (much like I do when I watch The X-Files on DVD) why I didn't watch it when it was on TV. What sets this show apart from something that hasn't aged as well (i.e. Quantum Leap) is the writing and characterization. Even three episodes in, you can tell the writers are paying attention to character. If someone is going to get a copy of the paper a day ahead of time, it couldn't happen to a more likable guy than Gary. He's just such an "aw shucks" guy that you can't help but root for him. He does good without being a do-gooder. What I especially like is how Gary is just an ordinary guy who has had something extraordinary happen to him. Yes, he stumbles with it, he screws up, but don't we all? As an everyman hero, he works. He's the kind of guy I'd want to be friends with. 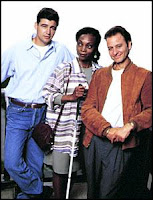 That said, his choice in friends is a bit uneven. I take no issue with Marissa, the receptionist at his office (a job he promptly quits after the pilot episode.) She is the angel on his shoulder, providing the moral compass. It's his "best friend" Chuck Fishman that I have serious problems with. I don't remember him from the few times I watched the series and apparently he leaves after two seasons, but his presence, even after three episodes, is beyond grating. His function is clearly to be the foil to Gary, and in so doing, is everything Gary is not. I'm trying to think of adjectives that describe him, but I keep coming back to selfish. He's like a weasel - one that is completely and utterly harmless - but a weasel nonetheless. When it comes to the paper, he thinks of nothing but the potential ways to make money off of it, usually in the form of knowing the sports scores so that he can safely bet on them, the outcome completely secured. But what bothers me most about him is that he's basically a beta-male pretending to be an alpha, whereas Gary has a healthy mix of both. Nothing bothers me more than someone walking around pretending to be something they aren't and the overcompensation that Chuck does in the guy-ness department just makes me shake my head in complete exasperation.

But no one's perfect. Gary does follow in the late 90s tradition of wearing approximately one pound of product in his hair.

An annoying character and excess hair product aside, I'm going to keep on going with this show. The stories are tightly written and almost always satisfying. And there's always a happy ending, which I am a sucker for, regardless of how cool or uncool that might be. One other bonus is the abundance of Chicago scenery. It just makes me want to go live in Chicago! New York City might be fun to visit, but Chicago is probably the only big urban area that I would actually consider living in.

But that's enough TV for now. I'm going to go read till it's time to go pick Anna up from school. Heidi's disappeared into her office and is back in writing mode.