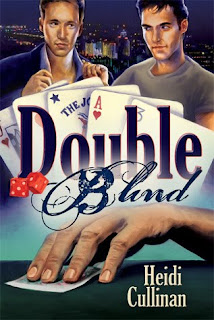 For those of you that are not our Facebook friends our follow us on Twitter, Heidi's third full length novel in 4 months, Double Blind, was released today. Of course, I read this book in its beta draft and then was required had a chance to do the galley proof a few weeks back. It hit the internet a week ago Friday in both paperback and eBook format and already, it's already climbing the Dreamspinner best seller charts (#9 overall today.) I thought since 1) I just got done working overnights and 2) I'm a bit behind in my challenge to read 25 books in the year I would do something on the blog to celebrate its release.

Double Blind is the sequel/spin-off to her well-received novel Special Delivery. When she finished writing Special Delivery, Heidi declared to me that Randy really needed his own story. Randy enters Special Delivery towards the end of its second act, and I'll admit, the first time I read it, I didn't really find him incredibly sympathetic - at least not initially. But I was willing to go with it - her instincts are rarely wrong when it comes to her writing. And so Double Blind was born, written in November of 2009 - the month to which we are used to losing Heidi to NaNaWriMo.

Double Blind opens in Herod's Casino in Las Vegas with Randy watching a video feed of Ethan Ellison at the roulette table. He is betting on black over and over again, and he is also losing over and over again. Randy is well known for his ability to read people, he makes a bet with Billy Herod, the owner of the casino, that he knows exactly what Ethan's story is. But has Randy finally met his match in Ethan?

While the book is, as most of Heidi's books are, a romance between two people - and, more abstractly, four people as Sam and Mitch from Special Delivery are back for an encore performance - it also throws Mafia machinations and Vegas' games of chance into the mix. There's quite a bit of poker in the book, and for those that might be afraid to wade into it because of the poker - trust me, you don't have to worry. The rules of the game are explained very well and in such a way as they contribute to the story. Somehow, even when explaining the rules to a game, Heidi still manages to show rather than tell.

I mentioned that Double Blind is a sequel of sorts to Special Delivery, but what I love about Double Blind is that it doesn't suffer from what I refer to as "The Mummy 2 Syndrome." It resists the temptation to take what worked in its predecessor and dress it up with more bells and whistles until it collapses under its own weight. Rather than rehash the past, what happens is that the familiar shows up and goes off in new directions. Consequently, it's not essential to have read Special Delivery to enjoy Double Blind (although reading the former is highly recommended.)

As I said when I reviewed Libby Drew's State of Mind, I really like it when the main characters in m/m fiction read like real guys as opposed to (as Mrs. Giggles said in her review of Special Delivery) "little girls with a pee-pee." Nothing bugs me more than seeing these men act as if they were somehow not men - as if by virtue of their orientation, their masculinity necessarily has to be ratcheted down several notches. This bounces me out of the story and mostly just makes me angry. So when the characters seem authentically written as men, I'm in. The flip side of that is that the emotional connection between men, regardless of orientation or the presence of absence of sex, is the draw for me in these novels, and that can sometimes seem not-very-mannish. Randy even thinks this during a particularly intense scene with Mitch "What the fuck, guys don’t talk like this, not even gay guys!" But as I have said a million times, although that may be the rule, it doesn't mean that it HAS to be that way. In fact, I feel like we would all better served if we banished the kind of statement that Randy made from our collective definition of masculinity. Men of all orientations have so few examples of real emotional connection and if m/m fiction can provide this, so much the better. Too bad that straight men (who, arguably, could use the education the most) will be the least likely to read it. If anyone ever asks me why I enjoy reading m/m fiction, those are the reasons I cite.