LDS (Latter Day Stevie): The Other Side Of The Mirror

I'm fond of saying that being a fan of Stevie Nicks' solo work would be so easy if her solo output had stopped after three albums. If any set of albums really represents a trifecta, it's her first 3 solo albums: Bella Donna, The Wild Heart, and Rock A Little. While this is not strictly true - 2001's Trouble In Shangri-La came closer to the brilliance of those first three album than anything in the interim - there is something about that set of albums that just really hits the mark. There was a natural trajectory from the acoustic folk of Bella Donna to the synth-laden Rock A Little, with The Wild Heart being an amalgam of the two, almost as if it were the offspring of those two very different albums.

The trouble comes with the albums between Rock A Little and Trouble In Shangri-La. The Other Side of the Mirror (1989) and Street Angel (1994) are really hard to love. As a fan, I feel like I end up making more apologies for them than anything else. They have only a handful of good songs between them, but as albums they really miss the mark to the same extent that the first three hit the mark. 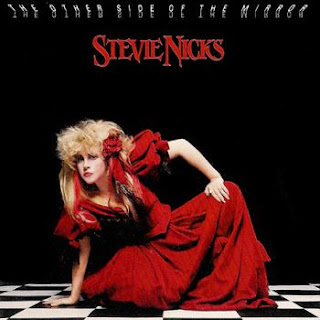 The Other Side of the Mirror is the first of Stevie's albums that I experienced in real time. I remember hearing about it while eating breakfast over MTV on January morning in 1989, with Kurt Loder reporting that it would be released "sometime this year." In podunk Iowa, our primary music retailers were K-Mart, Pamida and the local department store chain (now defunct) Sernett and none of them were ones that you could count on for accurate information on new releases. This was pre-internet and the information was not simply at your fingertips! It was eventually released in May of that year after great anticipation on my part.

Maybe it was the anticipation, but I have always been less than crazy about this album. It's WORK to like The Other Side of the Mirror. In a word, the album is overbaked, a victim of the worst of cliched 80s production. Whereas Rock A Little has aged well despite its completely 80s production, Mirror barely sounds like a Stevie Nicks record. She is spaced out and not really engaged in the songs at all. The lead single, "Rooms On Fire" is uninspired, buried underneath layer after layer of turgid production. Sub-par songwriting doesn't help her case either. And what in the world is Kenny G doing on a Stevie Nicks album? For me, TOSOTM is to Stevie Nicks as Hard Candy is to Madonna in that it's an album I really tried to talk myself into liking. Both albums have some strong songs but do not hold together as albums very well.

It's not all bad though. "Long Way To Go" rocks pretty well and despite the fact that it's relatively tuneless, I do still like the song "Juliet" which found a home on this album after being rejected from Fleetwood Mac's Tango In The Night. I think it's the reference to the blue lamp that pushes it over the edge for me. And I have a soft spot for "Fire Burning" even though it sounds like she's barely present.

Years later, we'd find out why she was barely present. Instead of being strung out on cocaine or some other illegal substance, Stevie was growing more and more dependent on the prescription drug Klonopin. She's on record as saying that she really has no memory of the Mirror tour due Klonopin use. As she herself said "The fabulous Stevie that everyone knew just disappeared."

But if you thought Klonopin colored The Other Side of the Mirror, just wait till you listen to Street Angel. You ain't seen nothing yet. But that's the next post.

I'm so glad you posted about Mirror. I was wondering why I have not picked it up in a zillion years. Now I have the definitive answer. Stevie is totally disassociated with not only the lyrics but also the album as a whole. Like you, I love love love the first 3 solo albums. The Wild Heart I remember asking for as a birthday gift - specifically for "Stand Back."

Yep, you're better off taking the few tracks I mentioned (and even "Rooms On Fire") and leaving the rest of the album.