My rhythm's (not) mow mow mow 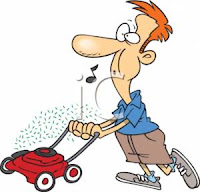 We know that it's officially spring because tonight, I mowed the yard for the first time.

I'm a bit late to the party the year as far as mowing goes. I have a couple friends who have mowed a couple of times. My neighbor has mowed his yard at least that. Apparently on Sunday, when I was at work, the whole neighborhood was filled with the sound of mowers cutting grass. Heidi told me she felt like going out and starting the lawn mower just as a show of neighborhood solidarity.

It's not news that I hate mowing. I get no satisfaction out of it AT ALL. All things being equal, I'd rather be snowblowing - and after the winter we just had, that's a very strong statement. Part of the trouble is that lawn mowing in April is deceiving. Sure, it's all fine and dandy now when it's 65 degrees and 10% humidity. If it were like this all summer, mowing would just be a minor irritant. But give it another 6 weeks and I can guarantee you that I'll want to be mowing naked because I will be mowing in Dagobah. It never fails - one hour of mowing and I am a completely soaked and sweaty mess at the end of it.

I also think that a lot of my disdain for mowing has to do with my yard. We don't have the greatest yard ever, and I would say that it's not for lack of trying except that it really IS for lack of trying. Much like mowing, I get no satisfaction out of yard work of any kind. Mostly, I'm just hot and sweaty (again) and then add in dirty. Where do I sign up? Heidi used to do a lot of that, but with her pain issues, we're really leery of her doing that kind of work, so it falls to me. We also have this front yard that has what I refer to as the grass equivalent of a comb over. Grass barely grows because it's so shady so consequently when you mow, the grass isn't really tall enough to give you any indication as to what's been mowed and what hasn't. So what you end up doing is trying to get as much of it as you can and hope for the best. The good news is that the lilies of the valley that Heidi planted are finally starting to spread like the weed that they are, so our front yard actually looks better this year than it has in years!

I was worried about the mower as well - first of all because I couldn't remember the oil to gas ratio needed for the two cycle engine. I wrote down the model number and manufacturer and went in to do a Google search which gave me nothing. I went back out to look to see if there was a serial number on it and, lo and behold, the directions for mixing oil and gas were right there on the mower. Also, toward the end of the season last year, the mower started getting very temperamental - mostly in the form of not starting. Well, I'm happy to report that not only did the mower start this year, but it started on the very first pull of the cord.

No matter how hard I try, I'll never be a yard geek.

(and while we're at it, let's see the video for the song that inspired the title of this post)