Grown up for grown ups 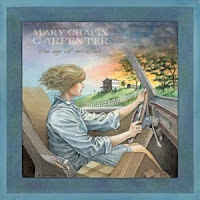 I stayed up late last night for the sole purpose of being able to do the digital equivalent of midnight shopping at a record store. I think the last time I actually went to a midnight release was 1998 when I went out to Wal-Mart in Iowa City to pick up Ray of Light. Midnight releases may seem antiquated in light of the rise of digital music, but there I was last night in the moments leading up to midnight, refreshing the Amazon.com page that would hopefully contain the download of Mary Chapin Carpenter's The Age of Miracles.

This has been one of the most eagerly anticipated releases of the year so far for me. I have written about Carpenter so much on this blog that those who are not fans are probably sick of it. But guess what, it's my space and my rules so here we go. I've been reading all sorts of reviews of the album this morning in an effort to gather my own thoughts and decide which direction I want to go with this post. Many of the reviews said much more eloquently what I was already thinking, and to simply regurgitate what other folks have said seems disingenuous at best and outright plagiarism at worst. In a way, there's a danger in talking about this album on the day of its release. It's almost too early to review the album as I've only listened to it all the way through once.

But I can't put this review off. There are albums that take their sweet time to connect and then there are others that do it instantly. The Age of Miracles is very much the latter type of album. Part of the reason for that is because Carpenter doesn't mess with her formula much. You know exactly what you're getting into and while there aren't tons of surprises, it is as I have said before, like reuniting with an old friend and the conversation picks up right where it left off the last time you met.

All the reviews I've read this morning have hit the same notes. This is a somber outing for certain, and many of them are still pining for Carpenter to cut loose like she did back in her Nashville hit-making days and do another "Down At The Twist & Shout" or "He Thinks He'll Keep Her." She seems so resolutely uninterested in doing that. Read interviews with her and you'll see that she is a profoundly thoughtful person, someone who's been through the music industry machine and is now comfortable with the path she's on even if it doesn't make tons of money or generate chart hits. My favorite review of the album - and the one that resonated most with me - is the one at PopDose. Reading the review, you can tell that the reviewer really gets Carpenter. He makes brief mention of the hits, but then says something like "...at their best, Carpenter’s songs fill you with a bittersweet melancholy that somehow leaves you with a smile." I couldn't have said it better myself.

Simply put, her music is a balm for my soul and that's no overstatement. I remember being 22 and just getting into her music and being almost embarrassed by how she was reading my mind. It's good to know that 17 years later, she still has that capability. I will admit to liking the songs with a bit of a punch vs. the languid ballads because I've always admired how she can marry the her obvious intelligence and way with a lyric with a catchy melody. And oddly enough, for those wishing for a follow-up to an earlier hit, she does this of sorts with the song "I Put My Ring Back On" which serves as a bit of a sequel to "He Thinks He'll Keep Her." Both songs speak to the difficulties that can plague even the best of marriages although the songs couldn't end any more differently. It's definitely my current favorite track. That's not to discount the ballads though - "I Was A Bird" and "Iceland" rank up with some of her best work.

I always say that Carpenter is thinking man's country. Make no mistake, this is a grown-up album for grown-up people. Heidi always says that despite the fact that I'm in the later part of my 30s, I'm still a consummate boy. She's right you know, and that boy has kept me more grounded than you might expect and I'm very fond of him. He's the part of me that is still giddy over Madonna releases and loves the thump-thump of a Freemasons remix. He's the part of me that spent 2 bucks on a Q*bert game for the iPad yesterday. But I also like the grown up I've become, and I owe a debt of gratitude to Carpenter for that - as unintentional as it was on her part. Reconciling the two is not always easy, but I think the last line of PopDose's review sums it up best.

I think [the album is] full of that bittersweet melancholy that makes Carpenter’s work so great. It feels like traveling — heavy with the loneliness of not yet being where you want to be, and brimming with the hope that you’re almost there — and it moves you with a grace that makes the whole thing sound easy.

I am really liking it. Another album you should think about checking out is Chely Wright's which is out on Tuesday. Despite all of the impending hype over her coming out, she's pretty amazing.