Her love is stronger than the universe 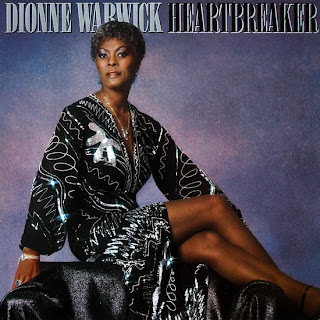 I am on a Dionne Warwick kick these days that kind of came out of nowhere. Actually, it didn't come out of nowhere - it was the result of me looking for Gladys Knight songs on eMusic and Dionne Warwick was a "similar artist" which I subsequently clicked on and well, the rest is history. I also blame my mom because I remember listening to her 45 of "I Say A Little Prayer" when I was growing up, probably sitting at a desk doing math problems or something. Anyway, I am not a Dionne Warwick fan by any stretch of the imagination, but I have a couple greatest hits collections, one that has all her 60s Bacharach/David songs and then another that has more of her 80s adult contemporary hits. I think a Dionne Warwick studio album would be pretty superfluous - she's mostly defined by her hit singles.

Anyway, one of my favorite Dionne Warwick songs is 1982's "Heartbreaker." The album of the same name was produced by Barry Gibb, who worked music gold on so many artists in the 80s - Barbra Streisand, Dolly Parton, Diana Ross - when he found his own singing career in a bit of a shambles after the disco backlash of the late 70s/early 80s. Anyway, my favorite part of "Heartbreaker" is the chorus because you can hear that trademark Bee Gees falsetto. It makes you forgive the horrendous album cover.

And seriously, those cliched 80s synthesizers do my heart good. Barry Gibb also recorded his own (inferior) version to serve as a demo of sorts to Warwick and then performed it with his brothers in a live concert that was probably on VH1.

The only other thing I have to say about Dionne Warwick is I can't think of her song "I'll Never Love This Way Again" without thinking of an autistic kid that was at a summer day camp at which Heidi served as a counselor very early on in our marriage. I had it on a mix tape in our car and every time it came on, he would sing it at the top of his lungs. It was also rather rudely used on Rush Limbaugh's radio show as the introductory music for AIDS updates. Asshole. I have a soft spot for it as it's one of those late 70s adult contemporary songs that my mom loved (and probably still loves) so much and I absorbed by osmosis. Little did I know that 30 years later, I'd still be listening.

I have always loved this song, and I consider myself a casual fan. Having said that, i completely get your resistance to her, because some of her music is downright cheese-riddled.

The fact that I bought all seven of Dionne's 80's albums shows just how uncool I am. They got progressively more inconsistent as the years went on, but there was always just enough good songs to make me take a chance on the next one. There were quite a few great album cuts over those 7 albums. The song "All the Time" off her comeback album spoke to me greatly and still does.
I think she owes much of her 80s success to landing the gig hosting Solid Gold. It was quite popular for a while and gave her a great platform to show off her new music even when radio refused to play it. The success went to her head a little I think and she went a little crazy toward the end of the decade and beyond. You'd think her Psychic Friends would have seen it coming.