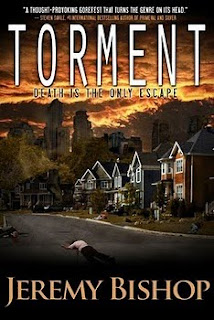 I just finished Jeremy Bishop's debut novel, Torment and even before I was done reading it, I knew that it would be a blog post. I can't remember exactly how I stumbled across it. I think I followed a link to another book that was in the bargain bin for Kindle books and this was one of the "similar books." I downloaded the sample and was so hooked that I didn't hesitate coughing up $2.99 for the whole thing. Not since the last Brian Keene book have I been so enthralled by a piece of horror fiction.

I'm finding that it's really hard to write about Torment without spoiling it, but I'll do my best. Nuclear war between Russia and the US breaks out and a handful of people including the President, Secret Service people, White House staff and some visitors to the White House for a Medal of Honor ceremony manage to escape the carnage by being launched into space in nuclear powered space ships in the vein of Project Orion. From there, they watch the destruction of Earth. The onboard computers monitor the conditions on Earth and are programmed to bring them back down when radiation has reached a safe level and the atmosphere is breathable. Imagine their surprise when a few hours after the whole thing starts, the escape ships start their descent back to Earth.

What they return to is a scorched Earth filled with the living dead. These are not Romero zombies (or even Boyle zombies.) In fact, I hesitate to call them zombies at all - too many of the canonical zombie rules are broken. But like the zombies of Keene's The Rising and City of the Dead, they really do work despite all the rule breaking even though they couldn't be more different.

Saying any more about the plot really would spoil it, so I'll stop there. The subtitle for Torment is "a novel of dark horror" and they are NOT kidding. The body count is high and the gore factor, while not off the charts, is quite elevated as well. Reading this book was like peeling back layers on an onion. Just when you thought you had it all figured out, the book would take a hard right turn and confound your expectations yet again. This is a good thing. While many zombie story cliches are present, the most prominent being the constant running from danger, the people, places and things encountered during the running more than make up for it.

One thing I found kind of funny in reading reviews of Torment on both Amazon and Goodreads was that many people declared the book "fundamentalist" and "too Christian." I didn't get this vibe at all. While there is definitely a spiritual component of the novel (to say one little bit more will completely spoil it), I didn't find it to be heavy-handed at all.

Bishop is a writer to watch. I've said before that novels involving any form of the undead are a tough nut to crack because the visuals are so important. Bishop, like Keene before him, makes up for the lack of visuals in a crisp writing style and compelling narrative. In a world in which horror novels are 90% less-than-satisfying, I am happy to report that Torment is more than worth any horror (or zombie) fan's time.

Sending a sample to my Kindle right now...

It sounds intriguing, and the excerpt was entertaining, but I'm afraid I'd have to know more about the ending before reading it.