You Couldn't Ignore Me If You Tried 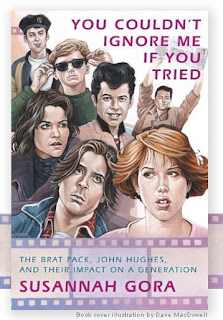 Like so many people my age, the teenage films of John Hughes loomed very large on the cultural landscape of my adolescence. Unlike so many people my age, there are many I haven't seen. For example, Sixteen Candles still eludes me, as does Pretty In Pink and Some Kind of Wonderful. But I have seen The Breakfast Club more times than I can count and surely that should count for something, right? Because I hadn't seen some of these essential films, I wasn't sure how Susannah Gora's comprehensive history of Hughes and his films, You Couldn't Ignore Me If You Tried, would play with me. On one hand, I'm a sucker for this kind of pop culture stuff, but on the other, would my lack of familiarity with some of these movies detract from the reading experience? I needn't have been worried because familiarity with the subject matter, while helpful, was hardly required.

The first thing I want to say about this book is that it very deftly avoided being a book that was all full of itself, chock full of essays about how this character or that character represented the greed of the 80s or some other bullshit thing. Books that take pop culture touchstones like Hughes' movies and then suck all the life out of the subject matter by attaching meanings that aren't there are almost always more interesting in theory than they are in actual practice. I have plenty of Madonna books of this ilk that, while admirable, are nearly unreadable as books. Instead, what Gora has done here is give us a living and breathing history of not just Hughes' movies, but of the so-called Brat Pack and other teen movies of that time period. Each movie gets its own chapter and she has definitely got the goods on the making of each movie. Reading this book made me want to finally sit down and watch Sixteen Candles and Pretty In Pink. It made me want to put the book down and rewatch The Breakfast Club.

I still remember the first time I saw The Breakfast Club. I was 15 and over at a friend's house watching movies on VHS with him and his girlfriend. I was the eternal third wheel in their relationship, but he didn't seem to mind mostly because a part of him really wanted to break up with her but he couldn't bring himself to do it. Looking back, I was pretty clearly being used there - not that he didn't like me or enjoy my company, it was just that my presence defused things to some degree. Me, I was just elated to be included regardless of my role. But I remember watching that movie and yes, it is cliched to say so but I saw myself in that movie. Who among us has watched that movie and not seen ourselves mirrored back at us? That's the genius of that movie - teenagers everywhere, from different walks of life and different high school cliques could watch that movie and see themselves. We saw not only ourselves but our friends as well. What I saw that night in that movie was a balls-out honesty that seems to only exist in movies. I think that movie taps into the loneliness of adolescence and how what we really want then, what I really wanted then, more than even a girlfriend was a good friend. I had one sitting across the room from me and others that weren't there that night, but even amongst that, the loneliness of those years were a heavy weight. Seeing that kind of connection in a movie was both reassuring and depressing - reassuring because you were given hope that it could happen and depressing because, well, it was "only a movie."

Without getting too psychobabble, most of us still have those lonely teenagers inside us. Some of them speak a lot more loudly than others. As adults, we tell them to shut up and don't treat them very well. I really think that's why life can be so completely unfulfilling. We lose touch with those teenagers that craved human connection. We get busy with our overscheduled lives and we forget about the people around us that give life its color. Facebook and Twitter, while nice are not enough. I can speak for at least myself when I say that as nice as our interconnected world is, nothing beats a face to face meeting with a friend, be it for a night out, a lunch or having them over to the house for a night of listening to music and telling the same stories over and over again. That, to me, is where it really is at. That kind of connection is why these movies still resonate with so many of us 25 years later.

This post kind of went in a different direction than I intended. I haven't said very much about the book! But what I will say about the book is that it is very readable and not at all drowning in academese or anything like that. However, as it progressed, it did tend to become a bit repetitive which is usually the case with books like these, but I didn't feel like that detracted horribly from the book. New interviews with all the expected cast of characters helped make this book feel less like a piece of nostalgia and more a fun look back at movies that shaped a lot of people from our generation.

One sidenote: despite a great deal of effort on the part of the book to convince me otherwise, I am still not a Ferris Bueller's Day Off fan. From the way they talked about it, you would have thought that it cured cancer. I still think Ferris is a spoiled piece of shit. That's just what I think. The book did, however, cause me to get over my general eye-rolling at the boombox/"In Your Eyes" scene in Say Anything and now I kind of want to watch it.
Posted by Dan at 1/21/2011 10:09:00 PM