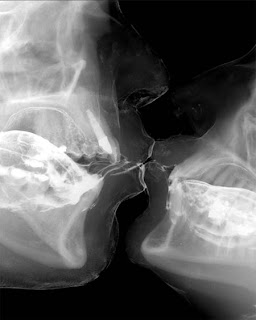 As a late 30s straight Midwestern guy, this article in The Guardian was fascinating to me.

My first reaction was "you've got to be kidding me." Is this for real? Really? I have certainly not seen this taking place in rural (or even urban) Iowa, but then again, this IS Iowa. We're usually a pretty pragmatic, live-and-let-live bunch - the last election notwithstanding - but if I were to venture a guess, I'd say this phenomenon is pretty rare here. I found it even stranger that the studies mentioned in the article were all based out of the UK, where I would say that men are as stoic if not moreso than men in Iowa.

I think it's pretty safe to say that most every straight man I know (myself included) would be uncomfortable with this. Hell, I would argue that most men our age are not super-comfortable with hugging each other - how in the world would we ever feel comfortable kissing each other? I think the vast majority of men would balk at even giving another guy a peck on the cheek which wasn't what this article was talking about anyway.

Once again, as is made clear in the article, it's a generational thing. And I, for one, applaud it. If this is a sign that homophobia is on the wane and the definition of masculinity is changing subtly yet again, more power to young adults pushing this change. It reaffirms what I've always known about marriage equality - it's a foregone conclusion because subsequent generations will care less and less about it.

I saw this in spades at my sister's wedding this weekend. As I watched them in the receiving line, countless guys came up to my brother-in-law to shake his hand and he would always say "give me a hug." I loved this. His family is the huggiest family I have ever seen - and I mean that as a compliment! As I have stated before, I'm a pretty huggy type of guy, but the vast majority of my friends are not.

But I still think that kissing is a hell of a long way off. I mean, we still have to get rid of the buffer seat at movies! Thankfully, none of my friends who accompany me to movies require one of those because honestly, buffer seats are just stupid.