So Now You're A Zombie 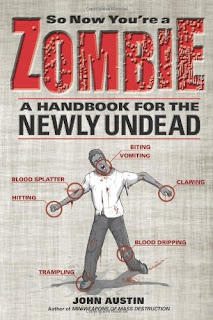 It's January 17th and I've already read three books! If this were the 2010 Book Challenge, I'd be off to a great start. At this time last year, I was still mired in Pride & Prejudice & Zombies, a book I thought I would like but ultimately didn't care for much.

Admittedly, the third book of the year was pretty lightweight, but hey, it still counts. So Now You're A Zombie: A Handbook for the Newly Undead is kind of the zombie counterpart to Max Brooks' The Zombie Survival Guide. Rather than serving as a manual for surviving the zombie apocalypse, this book guides reanimated corpses through some lessons on how to maximize carnage

As you might expect, it only took me a couple days to read and it only took that long because I was juggling another book along with and trying not to lose it - a distinct possibility any time I have more than one book going. But just because it was as light as a feather doesn't mean that it was bad. For zombie fans, it's more than an adequate read. The text is funny and informative and also kind of gross. The illustrations are also pretty cool and the pages have faux blood splatter on many of them, as if the book you're holding a manuscript rescued from a zombie-human skirmish.

The method of zombification in this book is the "z-virus" which is not only responsible for reanimation but also for the unquenchable desire for human flesh (especially brains) that zombies have. This is pretty in line with many current zombie films and books - infection seems to be the most popular way to make a zombie these days. There were also chapters about how the zombie's gastrointestinal tract still functioned so as to "feed" the z-virus which I scoffed at. Everyone knows that the major organ systems of a zombie are completely non-functional. However, using this book's theory, it would answer the question "does a zombie have to eat?" This was also the first time I had ever heard of zombies projectile vomiting as a means of spreading infection.

Also included were many lessons on human buildings, vehicles and strategies for killing and/or infecting. It was a good read that I'd recommend for any zombie fan. It'll take hardly any time to read at all and the last page was worth the price tag alone. I totally didn't expect it and provided a good laugh at the end of what was a very tongue-in-cheek book to start with.

Hee, hee. You're welcome. I bought that one for you way before Christmas.