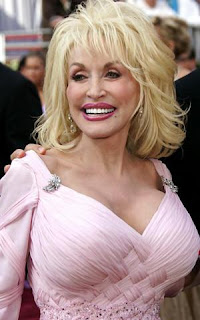 At break this morning, I realized that not only is today the one and only Dolly Parton's birthday, it's also a bit of a milestone for her. Today, Dolly turns 65 and with that, she is now eligible for Medicare! The jury is out on whether or not the Medicare Part A premiums will be waived, but I have a sneaking suspicion that old Carl Dean has worked a job that has paid Medicare taxes in some capacity, so there you go.

Does Medicare cover plastic surgery? Will Dolly's further attempts to nip, tuck and suck anything saggin', baggin' or draggin' be on the tab of the US taxpayer? My hunch is probably not, but man, I sure got a lot of mileage out of that joke today at work. I did have one of my coworkers tell me that she was "worried about me." Oh well, always keep 'em guessing, that's my motto.

To take it one step further, I got this image of Dolly going down to the Pigeon Forge Walgreens store to try to figure out what Medicare D plan would work for her. Let me tell you, if I were working retail pharmacy and Dolly Parton came into my store, I might have to be resuscitated. Do you think Dolly would mispronounce all the drug names like most people do when she ordered her refills? Do you think she'd refer to them as "subscriptions" or "genetic drugs?" (that actually happened to me in my retail days.) Maybe she doesn't have any prescriptions to worry about? She seems pretty healthy overall, but you just never can tell.

Well, whatever the case, I don't think she's going to be collecting any retirement benefits any time soon as she's still hard at work. She has a new album out this year, although not the often talked about all-dance album that would put a Believe spin on Dolly's career. The clock is ticking, Dolly. She's also headed out on the road again this year and even though I saw her twice in 2008, I'd go again in a heartbeat.

And Medicare Part DD? When she works that joke into her live shows sandwiched in between "momma had one on her and one in her at all times" and "you'd be amazed at how much it costs to look this cheap," remember you saw it here first.

Bless you Dolly, you're an American original. Ever since 9 to 5 and the Dolly: Live in London concert played a zillion times on HBO growing up, I've been hooked. The more cornpone she gets, the more I love her. Here's one of the 13 essential Dolly songs I blogged a few years back.