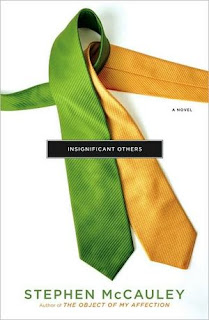 I haven't read any Stephen McCauley in a long time. The only other book of his that I've read is The Object of My Affection. I read it after I saw the movie starring Jennifer Aniston and the always-great and guy-I-wish-I-were Paul Rudd. The movie version was a cute little romantic comedy with just the right amount of bittersweet infused. Just thinking about it makes me want to watch it again. The book was another animal altogether. It is a well written book and certainly worth the read, but I was in no way prepared for the incredible melancholy that inhabited the book. Even for someone like me who is ok with melancholy and bittersweet, it was too much and mostly made me depressed. But I saw his latest novel, Insignificant Others, on Amazon and thought that I'd give it a whirl. Surely, it couldn't be as depressing as The Object of My Affection was.

Boy, I couldn't have been more wrong.

The plot of the book revolves around two coupled gay men, Richard and Conrad and their "insignificant others." Richard, the narrator of the story, is a 50+ man that is obsessed with fitness and oddly matched with the narcissistic and moderately younger Conrad. In the book's first chapter, Richard discovers a text message to Conrad from someone with an Ohio area code. Conrad, whose business requires him to travel quite frequently, has been making more and more trips to Columbus, OH. The arrangement of their relationship allows for dalliances, but they are never allowed to become anything that would threaten the main relationship. As it turns out, this Columbus rendezvous of Conrad's is just that.

Not that Richard is blameless, sitting in the middle of the room with a halo over his head. He has an insignificant other as well in the form of closeted married guy Ben. They meet for "long lunches" every now and then at a leased apartment that Richard has close to his work. The trouble is that, despite his assertion that Ben is an insignificant other, now he's beginning to wonder.

I made a big deal to Heidi about how this book was sad and yes, it really was. I was really caught up in the story and the characters but I couldn't shake the feeling of despair that hung over them as well. All the relationships seemed so unsustainable. They were fraught with all the problems that go along with intimate relationships and then complicated by the insignificant others. Richard was also an eternal pessimist, always able to find the flaws in everything. He assuaged this part of himself by keeping an "at least..." list i.e. "at least I'm not doing this...or that..." He had a lot of wry observations in life that were depressing but also rang at least slightly true. Although perhaps the only reason they rang true was because I was stuck in Richard's head which wasn't always the best place to be.

The character for whom I felt the most empathy was Ben, the closeted married man that Richard was having an affair with. This is impressive because how can someone whose life is basically one big deception of those he claims to love - his wife, his children - be sympathetic? He's basically a shithead for doing this, right? Well, I don't think it's quite as simple as that. No one knows him completely - not his friends, not his family, not even Richard (although he probably comes closest.) Basically, his life is a well-constructed lie built on sinking sand. By compartmentalizing himself so much, he's living as less than a whole person and living like that will eventually catch up with you. It's this kind of thing that I mean when I talk about how we're the sum of all of our parts, even the parts we don't like. Yes, he's a shithead for lying to his wife and deceiving her all these years, but the way his character is drawn in the book, you really can understand why and you end up really feeling for him.

The book wrapped up tidily at the end after I had been afraid there would be no resolution at all, especially the Richard/Ben relationship. Ultimately, this book was less than adept at balancing bittersweet with just plain bitter and for that reason it loses points with me. I was still very engaged in the book and the characters even though most of them were not very redeemable, but I was kind of glad when it was over. I'm not sure I could have taken any more melodrama.