One more gay diva down 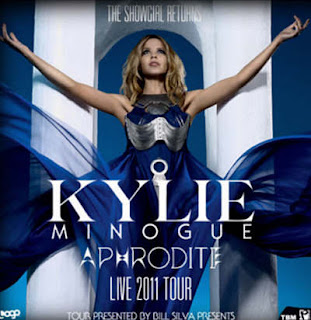 We secured tickets to Kylie's live show in Dallas, TX this morning. I had put in for time off the week of the show when we were first debating it (glad I did, I narrowly beat another time off request and would have likely been denied.) We have friends in Dallas where we can likely stay while we are there and if you put in one day of serious driving, you can get there in a day from here. I was still not completely sold as I was doing my required waffling on whether or not we could afford it and whether or not I wanted to travel that far. I had concocted all sorts of scenarios that would be deal breakers - shitty seats being the biggest one. Let me tell you, I'm not driving all the way to Dallas just to sit so far away that I can't even see the stage.

We decided this week, after passing on the kylie.com presale that we would give it a try and see what we got. If it worked out, great. If not, we were just going to chalk it up to it not being in the cards this time around and we wouldn't be too disappointed.

Tickets went on sale this morning at 10AM and despite discussing this with Heidi last night, she completely forgot. Clearly a higher force was at work because I woke up & looked at the clock saying 9:52AM and I leaped out of bed, a man on a mission. On my way downstairs, I told Heidi "Kylie tickets in T-minus 5 minutes!!" I loaded the page to get ready. 10AM passed and still no opportunity to buy tickets. Refresh, refresh, refresh. I always hate the purchase of concert tickets, it's high stress when really, the 2010 version of buying tickets beats the heck out of how we did it for our first Madonna concert with everyone on the phone a half an hour prior to tickets going on sale hoping you didn't get off hold before the on-sale time.

When I finally got in and put in my request and front and center (but back a ways) reserved seating came up, we wasted no time. At $80 a ticket, it was a bargain. The cost of three of us to go is slightly less expensive than my one ticket to The Confessions Tour in Vegas in 2006. So YAY. We're going. I guess we were in that 25% chance of going that I predicted. This will be Anna's very first "grown up" concert so she's especially excited.

I'm excited to go to Dallas. My blogging friend Robbie, who I met up with in 2009 in L.A., will be at the show as well. It'll be fun all around. And we're going to try to sneak in a trip to see Heidi's sister in McAllen, although that will require me being able to get just a little bit more time off work.

So with Kylie, I can add one more gay diva to the list that I've seen live (and if there's any doubt about her being a gay diva, one need look only at the fact that LOGO TV is cosponsoring the American leg of the tour.) That got me to thinking about how many and which gay divas I've seen live. With the help of my friend Kyl (who I will be seeing Lady Gaga/Scissor Sisters with in March) we came up with this list.

Who's left? Well, there's Donna Summer, Diana Ross, Janet Jackson, Patti LaBelle, Bette Midler, and of course, Streisand. But as Kyl said, you have to be willing to sell a kidney for a ticket. Also, I can't help but think that a Streisand show would be a bit of a let down as I'm used to "spectacle" arena shows and the thought of her standing in place all night is not super-appealing. But if she lets loose with the F-bomb, I'm totally there. Of those listed, the one I would pay to see in a heartbeat is Donna Summer, but who knows.

Did we miss any? It doesn't really matter because we are going to Kylie!! The Sam Keller in me is over the moon (because you know she got the Kylie fanaticism from somewhere.)