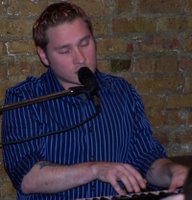 I suppose now's as good a time as any to blog my Casey Stratton show experience. Let me just start with this - it was worth all the aggravation and irritation that I had with Amtrak and the subsequent driving that I had to do in order to be there. But there's a lot more to the story than just that.

I got into Chicago about 8 hours after I started after being stuck in I-90 rush hour traffic for the better part of 90 minutes. That's one of the most hilarious things about driving in Chicago - the speed limits are one of two things. They're either a speed "suggestion" because everyone is just going whatever the traffic is taking, or you're stuck in traffic and the thought of going 5 miles an hour, left alone 55 miles an hour is pretty much a pipe dream. But I finally got to Doug's apartment in the Lakeview district at around 7:15PM and I was exceptionally glad to park the car and not be driving until the next afternoon. We went out for pizza and then headed back to his apartment so I could get ready to go.

I left the apartment around 9:30PM to get to Uncommon Ground. It was only about a mile and a half away, but I figured I should probably just cab it. So I hail a cab on at Belmont and Sheridan and I get in and say I want to go to Uncommon Ground. The cabbie asks me where that is, at which point I'm thinking "isn't that your job?" I really couldn't remember the address of the place - I knew it was on Clark Street and knew is was in the 3000s. But beyond, that I was just guessing. I said it was at 3300 Clark. We get there, and I realize that I'm way off because we're not close enough to Wrigley field so I tell the cabbie that I thought it was 3900. He kind of chews me out because if he had known that, he'd have gone a different way and I'm all "what do you care? You're getting a bigger fare!" Still not 100%, I call Heidi on the cell phone and she looks it up on the net -- it was 3800 Clark, so I wasn't that far off.

I get out of the cab and almost immediately realize that I had forgotten my goddamn camera at Doug's apartment. For a brief moment, I entertained the notion of not going back to get it, and then I was all "no, that's the only reason I brought the camera!" So I hailed another cab and went all the way back to Doug's apartment and picked up the camera. And the whole thing starts over again, except this time I know the address so I don't have to have the whole uncomfortable interaction with the cabbie.

My reservations were for 10, originally I made them for two people because I didn't know if Doug would want to go. He was tired from working all day and decided not to go so it was just me. This was a bit on the awkward side as I'm not usually one that goes to things by myself. So I decided to drink Merlot until I didn't feel uncomfortable any longer. Me being who I am, it didn't take too much, and man was the Merlot good - especially considering it was from California. Before too long, I was actually making polite conversation with the total strangers sitting next to me, telling them all about him as he was getting ready to play. 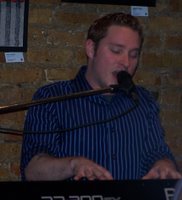 The show was fantastic. Unfortunately, his "show curse" struck again and his keyboard stand was broken, so he had to set his keyboard on two tables. But the show was so utterly fantastic. It was bizarre, because in many ways, it felt like he was playing the whole show just for me which is utterly ridiculous, but I suppose any good performer can make a fan feel that way. Of course, then you get to a certain level of celebrity (like Madonna) and well, you just don't feel that way, but there's still a touch of it. Even at the Confessions Tour, I had that feeling - not quite like I did at Casey's show, but it was there.

The song selections were great - like I said, it was all my favorites. But most importantly and amazingly of all, he played BOTH of the songs that I requested on his message board a couple weeks ago. "Dog's Mercury" from the Lily Sleeps album and a cover of Madge's "Live To Tell" complete with a shout out to yours truly. I have video of both of the performances which I'd love to embed on the blog via YouTube, but I really feel like I should get Casey's permission first as it is his show. I tried PM'ing him on his message board, but for reasons completely unknown to me, I can't get the message to move out of my outbox and into the sentbox. Perhaps he has private messages turned off on the message board. I suppose I certainly can't blame him if that's the case. Edit: He told me he doesn't have a problem with me sharing the videos, so I'll blog them sometime tomorrow or the next day - whenever I get time.

But it was exceptionally cool to have "Live To Tell" go out to me. It made me feel all warm and fuzzy.

And after the show was over, he did the usual signing of CDs and meet-and-greet of the fans, 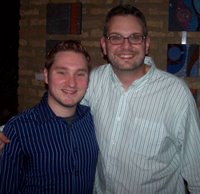 and it was great, because he's been to this blog (!!! -- I KNOW!) he knew of all my troubles with the train and driving and whatever so that was really cool. My goal was to NOT do a Kevin Costner a la Truth Or Dare and call the show neat. (Neat? Anyone who calls my show neat has got to go!) And we just talked a little bit up by the front bar and I got to be all fan boy and gush about his music and get my picture taken with him and everything! See exhibit A at left -- even though I wish I had taken a better picture!! I'm so glad to report that Casey is as cool in person as he is on his blog and on his records. He's very down to earth and seems to love interacting with the fans after the show.

It's so great that someone whose music means a great deal to me is also a very decent human being as well.

I bought a CD of the show that night - I almost didn't, opting to wait for it to be released in his digital store, but I found out today via his blog that it's not going to be released because of the amount of distortion (apparently, the sound guy recorded it too loudly.) I noticed the distortion when I was listening to it - I didn't think it was that bad, but I am probably a touch biased. I am glad that I bought it - it's a great aural souvenir of the night.

Thanks Casey for a great show and a great experience. It was totally worth the trip.