Crazy dreams (are made of this)

I woke up this morning at 3:30AM and it was very much a "done sleeping now" moment. How this will play into my general fatigue and malaise that I've been experiencing this week remains to be seen, but for now, I'm willing to go with it. I don't work until 2pm tomorrow, so if worse comes to worse, I can go to bed early again tonight and sleep in tomorrow morning. Or alternatively, I could be tired at about 10AM, in which case, well, I'm fucked. 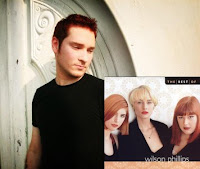 But in any event, when I woke up this morning, I was waking up out of a particularly vivid (and crazy) dream. Fed in no small part by the loads of Casey Stratton that I've been listening to recently, I had a dream that I was at one of his shows. I don't know exactly which city it was in, but it was obviously not local as Heidi and Anna were both with me and we were staying at a hotel. Rather inexplicably, a lady from work was along with us, begrudgingly providing child care. The show was not at the expected coffee shop or small venue, instead, it was in a small drugstore - much like the independent pharmacies like The Apothecary in Carroll or maybe a mid-to-large size Medicap. But there was Casey's keyboard, set up in front of the antacids and cough and cold medicines. And what's funnier is that he was actually performing in the dream.

There was a pretty good crowd there - the front of the pharmacy was pretty much SRO so he was happy about that. I don't really remember much of the set list except for one song. He took a little pause and said "OK, this next one is a cover, and it's Wilson Phillips 'The Dream Is Still Alive.'" OK, holy shit, when was the last time I even THOUGHT of that song? 17 years ago when the CD was current, maybe? But, regardless of what dusty corner of my brain that was sitting in, he did, indeed sing this song. And what was EVEN funnier was that about mid-way through the song he pushed the keyboard away and started doing this little choreographed routine to the song. To Wilson freaking Phillips!! During this dance routine, he threw a couple bottles of Maalox out in the audience. Insane!! The odd thing was, as crazy as it all sounds, it was actually quite good and very entertaining!

And then for the last song of the set he was going to do "Live To Tell" (I knew immediately from the opening chords, very much like I did in Chicago last October) at which point Heidi was displeased because she really wanted to hear "This Woman's Work." But neither song was meant to be as the owners of the store at this point said the store was closing in 5 minutes, and Casey was irritated by this because he always likes to sell CDs and sign stuff after the shows. And they weren't budging - at one point I remember a very severe looking lady declaring that we "had 30 seconds."

That's pretty much all I remember. Of course, when I woke up, I had to dig through my CDs to find that Wilson Phillips album with "The Dream Is Still Alive" on it (I'm nothing if not completely suggestible.) And Casey, if you're reading this, we do have a Medicap here in Ames when you decide to tour next - but I won't expect any Wilson Phillips songs or snazzy dance numbers. ;)

EDIT: I thought that it was perhaps a long shot, but here's the video for "The Dream Is Still Alive." The video and audio start out VERY out of sync, but they seem to get over themselves part way through.

The irony of this is that Carnie Wilson and I have been very close friends since 1996, so it's not impossible that I would cover Wilson Phillips. In fact, I recently heard "The Dream is Still Alive" while shopping at a pharmacy. Perhaps you are picking up on my brain waves. LOL I LOVED Wilson Phillips when they came out. I used to sit in my room and sing a fourth harmony part to every song. Good memories. Then, in 1996, Carnie came to one my shows in LA and we hit it off instantly.

Oh yeah...screw that pharmacy woman!!! I will not be rushed! haha

How weird is that!? Like you said, I must have been picking up on your brain waves! I always thought that Carnie Wilson had the most beautiful voice in Wilson Phillips - a personal fave of mine is "This Doesn't Have To Be Love" from their second album.

Not sure why they broke up - I know that their second album didn't spin off the hits like the first one did so perhaps that had something to do with it.