Step back in time

I got a card from my cousin Christy yesterday. It contained some photos that she found that she thought I might like to see again. And I thought, what the hell? Totally bloggable on a (admittedly) slow blogging week.

The first three pictures are all from around the same time period - 1989-1990. This first one is my cousin Melissa and me at my brother's confirmation party. 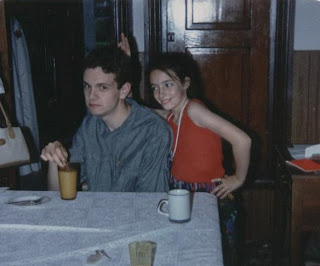 What is up with that shirt I'm wearing? Yuck! And I'd love to know what it is that I'm drinking that requires a spoon. Chocolate milk perhaps?

Here's a pair from Christy's graduation. 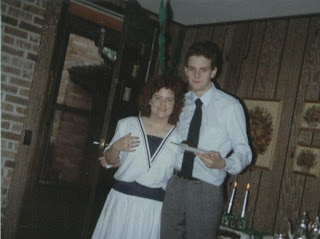 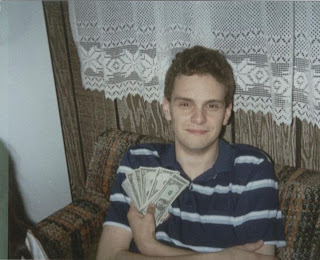 OK, looking back at pictures like these reminds me of why I hated pictures of myself, and to a degree, still do. Look at that bouffant hair! What WAS I thinking? And I also look like I haven't eaten in about a year and a half. Seriously, folks, that's how skinny I was in high school. Of course, to be somewhere in between that and what I am now (which is by no means fat but is decidedly not what I was) would be nice. These pictures capture me at what I consider my gangliest, and at times, it's still the person I see in the mirror - although I know that I look a whole lot better than that now.

Finally - a more recent one. It's Anna and me. She's about a year old. It was pre-facial hair and pre Doctor Who specs. It's funny, I'm smiling, but I don't look happy. I remember that time period. It was probably the time of my life when I was the most depressed I had ever been. Thank goodness THOSE days are behind me. But still, even though there was all that crap going on in my head - a storm of emotion that couldn't be quelled no matter how hard I tried - there was that little girl on my lap, making me smile. 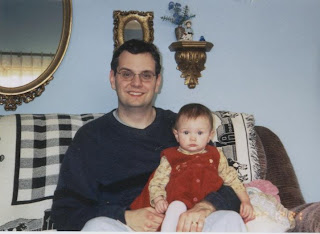 You know, it's funny, because you look at all those old pictures and criticize yourself or laugh at hair, and in every last one, all I see is the man I love.

Which is sappy as hell, but you did marry me, and you knew that before you bought the ring.

Those pictures really evoke an era in time. I was not too much older than you then (err, still true!) and I looked like that too. If you were that age now, you'd probably have had a variaton on emo hair!

I also think you are one of those people who looks completely different in each pic. Or maybe it's just the years. Or maybe it's because you morph into Doctor Who.

dan...brian callahan here...you got that feathering hair shit down pat my man....damn...