I dreamt last night of the Constructicons. For those of you who may not know, the Constructicons were a type of Transformer - they were, as the name suggests, different types of construction vehicles. Their ranks included a cement mixing truck, a bulldozer, a payloader, a dump truck, a truck crane and a steam shovel. What was even better, they had the ability to form the mighty robot Devastator.

When I was a kid, I had the entire set of Constructicons - purchased at Sears or something like that with Christmas money for the astronomical price of 50 dollars or something like that. Anyway, with all this talk of the Transformers movie that's coming out, I decided to see if Mom had kept all my Transformers that I had when I was a kid. And sure, enough she had. The last time I was back at their house I went through several boxes looking for Transformers. And in so doing, I found three of the six Constructicons. 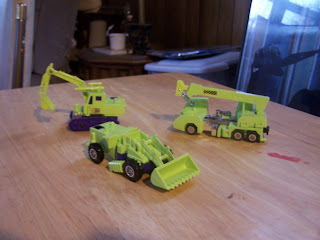 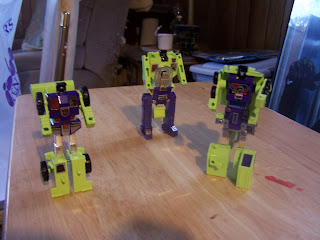 There they are - Scavenger, Scrapper and Hook. But sadly, I'm missing the other three. I've been searching on eBay and replacing the remaining three would prove to be quite pricey. And finding ones that are in half-way decent shape without duplicating the ones I have is proving to be darn near impossible. I KNOW that I had the other three, and that they are probably in my parents' house somewhere, but finding the right box is more than I really care to undertake these days. They don't even need to have all their accessories as I found the plastic bag with all the pieces of Devastator along with the three Constructicons - and that's fortunate as precious few of them actually have the pieces.

So last night, I dreamt that I was in some sort of comic book shop and that behind the counter, they had the three remaining Constructicons that I needed in order to form Devastator. I kept on seeing them behind the counter and really was wanting them, but couldn't seem to get the attention of the shopkeeper. Finally once, I did, they kept on moving around and morphing into the ones I had - and I kept having a hard time remembering which ones I needed. And when I asked how much they were, the total for all three that I needed came to something like 30 dollars. I knew that we didn't have the money for me to be spending 30 dollars on Transformers, but I did it anyway. And then when I told Heidi, she was none too pleased.

I think that this dream is less about Transformers and more about money. We're trying very hard to limit our spending and NOT use our credit card as we work to get it paid down. Six months ago, I would have just bid on those things on eBay and put it on the credit card. Now, if we ever want to do things like go to England or remodel parts of the house, we need to limit that kind of spending. And perhaps that was my subconscious rebelling against that - because, yes, it's hard a lot of the time. I work in a well paying job and at times, it seems like my right to be able to do what I want with that money. But the unfortunate part of that is that I must keep in mind that we moved a good 3 years before we could really afford to do it, and then took a huge loss on our house that we had previously. Not that I'd change a single thing, but it 2006 really drove the point home that we need to get our financial house in order.

Until then, I'll just pine for this: 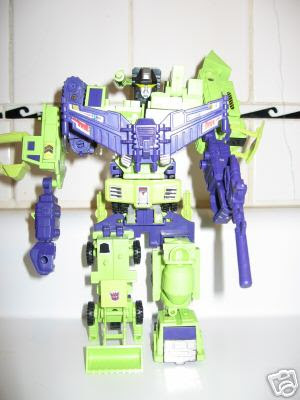 My first Transformer was Blue Streak. I'm not sure what happened to our stuff. We never did get all the various individual figures to make the larger robots. Cool that you did!