Yesterday, despite a less than desirable financial situation following my biweekly paycheck, Heidi went out and bought me the CD/DVD of The Confessions Tour. Have I ever mentioned what an absolutely fabulous wife I have? I had convinced myself that I didn't need it and that I could wait until we get the tax refund. I would have to get by with my bootleg audio of the tour (which, as I've detailed before, is surprisingly good for bootleg material - I have both the Phoenix and Paris shows.) 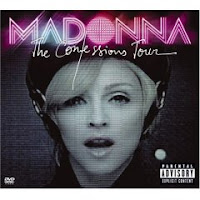 ee it as it was meant to be instead of the edited to ribbons version that was shown on NBC last November. And of course, we had to watch "Jump" because Anna loves it. And it is so much better than the NBC version - perhaps it's just the lack of ads and annoying edits that were present during the NBC broadcast. But the entire tour is there, intact, with nothing edited. YAY!

Tonight I was watching the bit starting with "Music Inferno" up to the end and it was like I was back in Las Vegas watching the show live. It brings back such fun memories and really, that's what a tour DVD is supposed to do. Sure, it's a great way for people that can't get to her live show to experience the live show, but truly, something like The Confessions Tour can't be contained on a TV screen. But it's a pretty good souvenir of the live experience. I think this is probably Madonna's best tour - something I thought right after I saw it and watching it again, I remain firm in that opinion. While Re-Invention comes close, there is just something about this tour that really seemed to get Madonna in the mood to perform live. Her performance is so joyous in so many parts - the part that gets me is how much she smiles. Contrast this with Drowned World, where she barely addressed the audience beyond scripted shtick and at times really seemed to be going through the motions. (And a substandard set list didn't help matters at all.)

And even though the whole experience of the Confessions Tour was sullied a bit by Jeff's kidney stone, trying to get to the airport to catch our red eye flight which remains, to this day, the single worst flight I have ever had - I still have such fond memories of it. So much so that the next time Madonna tours, I won't even pretend that I don't want to go!

i haven't confessed yet because i spent an absolute fluffing fortune in NYC and now need to sell darrens body on the streets of london (great deb song) to pay off the mastercard. realised they call it mastercard cos once you use it they own your ass! PS - darren is loving dexter book and show as well!