Yesterday was my grandpa's funeral. I don't think there's anyone that looks forward to going to a funeral. I know that I wasn't looking forward to going to this. Not because I didn't want to go, but there are certainly better circumstances under which to see family. But yesterday, January 6th, was the day chosen for my grandfather's funeral - the day we said our final goodbyes.

My grandfather would have been 90 years old yesterday. In fact, there was a birthday party that was being planned for him prior to his death. The cake had been ordered and everything! So instead of having the birthday party, we had his funeral. Or rather, we had a bit of both.

The funeral was a very standard Lutheran funeral, complete with the singing of "In The Garden" and "Amazing Grace." There was a message delivered by the retired minister of the church - a minister who knew my grandpa well and was the one that performed my mom and dad's wedding ceremony. It was a sad time, and I think even I had a few tears. Not so much for my grandfather, but for those he left behind. I don't think it's possible to be ready to lose your spouse. Even if you know it's coming - it's hard to let go. Especially after 65 years. And that was what happened to my grandma. She knew he was sick, but, in talking with my cousins, she didn't think it would happen as fast as it did. She expressed sadness about "putting him in the ground" on Saturday. I am, however, very glad that she is living in assisted living and has friends and support out there, rather than rambling around an empty farmhouse.

We went out to the cemetery following the service for the interment and they had the usual "ashes to ashes, dust to dust" speech. My grandfather was buried in an ash casket in the town he grew up in. After the official church business was finished, all the grandchildren (and anyone else who wanted one) were handed a balloon to release. My mom asked on of my cousins to say a few words prior to the release of the balloons, but instead of that, we all sang "Happy Birthday." Right there at the grave site. It was a thing of beauty. My dad snapped this photo of the balloon release. 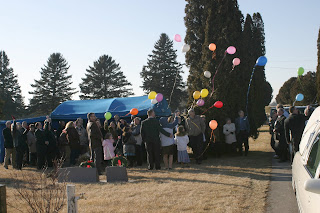 It was just what he would have wanted - and you could feel his presence there.

Following that, we all went back to the fellowship hall at the church to have ham/turkey sandwiches, brownies and coffee. Oh, and it wasn't complete until you had a piece of Grandpa's birthday cake, which still had "Happy 90th Birthday Dad & Grandpa" on it. It was just perfect. A perfect celebration of and memorial to his long life and the legacy he left behind. 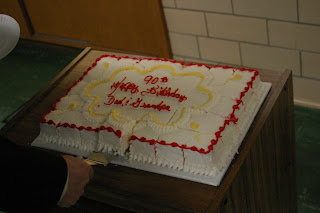 I hope that when I die, my funeral is as full of memories as his was. And please, spare me the "In The Garden" stuff. I'd rather have my family sing a rousing version of "Vogue" followed by a dance post interment. But seriously, what happens to me after I die, I don't really much care. All that stuff isn't for the person who died, but for the people left behind.
Posted by Dan at 1/07/2007 07:43:00 PM

Your poor grandma. Visit her!

My funeral will have two songs - "Don't It Make My Brown Eyes Blue" by Crystal Gayle and "Dancing Queen" by Abba. I have thought about this at length, though I hope it doesn't happen for awhile.

Hi Dan - having lost my Nanna last year I can totally sympathise with this. I think it was rather wonderful to eat birthday cake at his funeral - to celebrate the life and the death. So few people remember to celebrate the life. The funeral I went to was all death, and the person at the centre of it was completely forgotten. That's truly sad.

Hope you and your family have a good new year, even if it hasn't got off to a great start. Take care, P