Once upon a time there was a shirt. I purchased it at JC Penney in 1993 - I was deep in my plaid days and would wear almost nothing except for button down plaid Dockers shirts. It really wasn't a fashion thing - OK, maybe just a little, because I really liked how they looked - but mostly, they were just comfortable. And we all know that comfort trumps style any day of the week. Well, almost any day, that is.

Anyway, here's a picture of the aforementioned shirt. 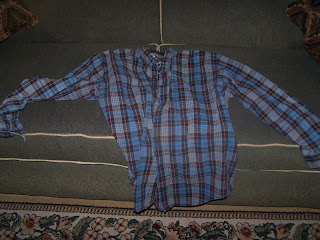 I really loved this shirt - I loved the interplay of the black, blue and orange. I could never describe it as a particular color - I think , though, that it's the orange that sticks out the most for me. However, at some point, it got a rather unfortunate association. Whenever I would wear it when I was in college, my day was almost invariably bad. And because of this, it was forever saddled with the label "the unlucky shirt."

I always hated for it to have that association - but I am superstitious as hell and for quite a while, I stopped wearing it (not to mention that it really did kind of fall out of style.) However, one night in November of 1995, I decided to wear it to Jeff's housewarming party. He had moved down the hall from one apartment to another and Jeff, who never needs an excuse to have people over, decided to invite a whole bunch of people that he knew to celebrate the move. I was one of them - and despite the fact that I was exhausted from having been up the entire night before finishing up a lab report (and plus the fact that I was riding down with our navigationally challenged friend Jen) I still agreed, albeit a bit begrudgingly, to go. So it was me, my unlucky shirt and my Baltimore Orioles baseball cap (which had been given to me by my former roommate - not that I'm anything even remotely resembling a baseball fan) that made the trek down to Washington that night.

Among the other people that Jeff had invited to the party was a friend of his from school - Julie -who also lived in Washington although the school they taught in was not in Washington. She came along as well and brought her daughter who was recently graduated from college and trying to figure out exactly what came next. She was living in her mom's basement - not something I envy of anyone.

Oh, and did I mention that her name was Heidi?

She says to this day that she spotted me from across the room in my Orioles cap and unlucky shirt and something just clicked. I say the same thing - only she wasn't wearing the unlucky shirt or the Orioles cap. (actually, she was wearing a very beautiful white sweater!) Although we were slow to start, it's funny to hear Jeff tell the story about how we ignored everyone else at the party and talked just to each other. People are leaving, we're talking. Jeff and Jen are cleaning up the dishes, we're still talking. We watched the then-brand-spanking-new Madonna video "You'll See" (and she got a foretaste of the Madge obsession that she'd spend the rest of her life coping with - although she didn't know it then!!) We hit it off splendidly.

Yes, it took me 3 weeks and much nudging from Jeff to actually call her and ask her out again (she was nothing if not patient with me and my glacial approach to relationships.) But the rest, as they say, is history. I bought Madonna's Sex book and she thought that was fabulous. I subjected her to a viewing of Xanadu and she didn't run screaming from the room. She gets definite points for that.

Roughly two years later, we got married in Iowa City on an 80 degree October day. We specifically chose October so to have a nice cool fall day. I sometimes wonder if I wasn't wearing the unlucky shirt under my tux.

So the shirt's not so unlucky anymore, although I still refer to it as such - but mostly in jest. It's been relegated to being worn under sweaters and fleece pullovers for several years now as I'm not as skinny as I used to be and it's worn out in places from overwear. And just recently, the collars started to fray. Witness exhibit A: 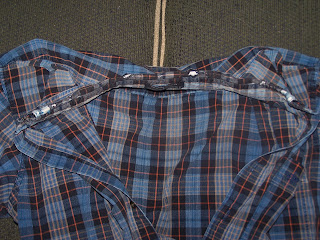 And because of this - it's not really even suitable for wearing under things anymore. And funny thing - I'm sad. It's the first piece of clothing that I'm actually a bit sad to see go. We talk of cutting it up and putting it into a quilt - an idea I like very much.

The whole thing reminds me of Mary Chapin Carpenter's song from which I got the title of this blog post:

This shirt is old and faded
All the colors washed away
I've had it now for more damn years
Than I can count anyway
I wear it beneath my jacket
With the collar turned up high
So old I should replace it
But I'm not about to try.