Did I shave my legs for this?

What an eventful New Year’s Eve we had. Jeff and Caryle were in fine form. It all started a bit sedate – probably brought on by the fact that the weather was not the most conducive for driving so it took them quite a while to get here. And instead of riling us up, the margaritas and other alcoholic bevarages seemed to be putting us to sleep. By the time “I Knew I Loved You” by Savage Garden came on the iPod (it was on shuffle), we knew we had to take some drastic measures. And who knew it would take Whitney Houston to do it? Inspired by Caryle’s winning of the 2nd place prize in her 5th grade dance contest dancing to “How Will I Know”, we cued it up on the iPod and before we knew it, we were all dancing like fools. And although we may have looked like fools, we felt like gold on the inside. 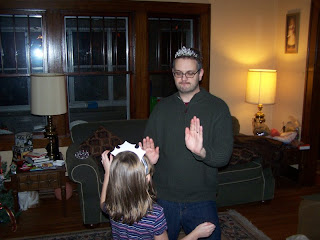 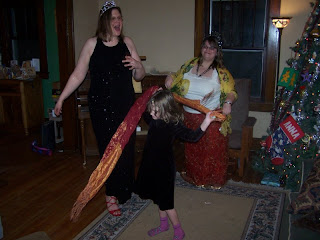 I have to say that Jeff is one of my personal heroes. He is really a person that, whether he knows it or not, leads the “fuck you!” charge against traditional masculinity. And I’ve always been a bit of a sidekick in that respect, cheering him on, while quietly succumbing to societal views on masculinity in the background. Although I have to say, in the last year, I’ve been so much braver than I have ever been in my life. Jeff and I went to Brokeback Mountain together. On Super Bowl Sunday. I KNOW!!! (as Monica would say!) Jeff has gone to Halloween parties dressed as Madonna. And Joan Crawford. Unfortunately, I can't find pictures of either of those.

So, after a few margaritas, a lot of dancing, and a lot of fun, I had my own “what the hell?” moment last night as well. Inspired by the Sugababes “Red Dress” and by Heidi and Caryle and Anna all coming down looking ABSOLUTELY FABULOUS and dancing around -- not to mention an insane amount of egging on and double dog daring by Jeff, Heidi and Caryle - this is what I was talked into. 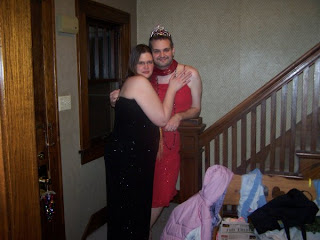 And you know what? I almost didn’t blog this. But then, I remembered my New Year’s resolution. Actually, I’m not calling it a New Year’s resolution. I’m calling it a change of attitude. That mental shift – the “are you ready to jump?” come to life, in brilliant, living color. But I have resolved in 2007 to be braver, to care less about what other people think of me and just be who I am. Which is not to say that I’m a transvestite – I’ll leave the cross dressing to Eddie Izzard who makes a much better looking woman than I ever could. But I think that there is more to me than meets the eye. There’s so much more to any of us than meets the eye.

Which kind of makes us all a little bit more like the Transformers, I guess.

The best parties are the ones where no one gives a Sh*t and just has a good time! Sounds like fun!

the margaritas may have been "cheating," as you say, but blogging it after the fact (stone cold sober, one would assume) gets you some serious bravery points. :)