So as I was saying, it snowed last night. It was really windy and cold, the snow whipping around off the roofs of houses and generally making driving and being outside an unexciting prospect. But Anna's been dying to go sledding, and when we saw a couple kids sledding down the hill down the street last night on the way back from the storm, we made a deal with her that we'd go on Monday. I still can't believe those kids were out there at night while it was snowing sledding. Apparently, they were on to something.

We got dressed up in our winter best and trudged down the street to the hill which serves as the sledding place in the winter and the place from which to watch fireworks every 4th of July. This was the sight that greeted us. 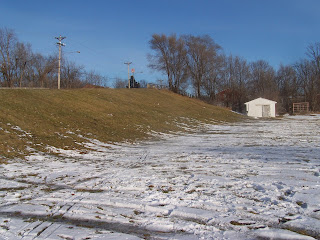 A good chunk of the snow already melted. I half way feared this while we were walking down there - the grass sticking up out of the snow, the sidewalks already turning to mud. But we persevered. We did what people in Texas probably do faced with the prospect of it not snowing for another 10 years -- we sledded anyway. Actually, Anna did all the sledding. In a complete and utter turnabout from last year, she INSISTED on going down the hill by herself. This was really ok with me as I didn't feel like getting all muddy and the part of sledding that I really hate is lugging the sled back up the hill.

Anyway, here's some pictures of my girl - growing up even faster than I want to think about. 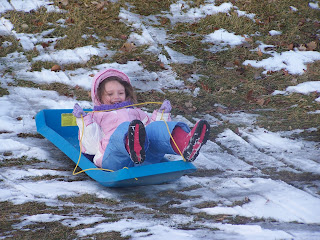 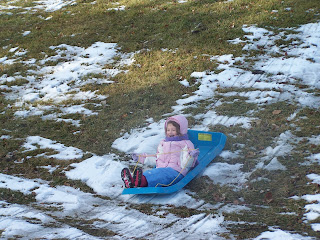