Heidi is all down for the count with strep throat. Seriously, I think she was about ready to rip out her throat this morning, it hurt that bad. So I insisted that she get to the doctor and sure as shooting her strep test came back positive. But she is now in possession of amoxicillin, so she's on the mend.

But since she is sick, it fell to me to do the big grocery run tonight. This is not my usual territory. I don't do it well, but I am can be taught and am willing to learn. I can do the small runs, but have NEVER done a big grocery run all on my own. So admittedly, I was nervous. I needn't have been. When I got home from work today, I was presented with what can only be described as a work of art. Behold, the grocery list. 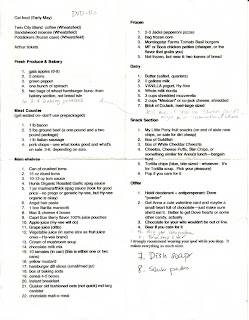 You'd have thought that it was compiled by Leonardo da Vinci. It is a thing of beauty. I hesitated posting it here because I always say that you can tell a lot about a person by the contents of their grocery cart (so let the armchair psychoanalysis begin), but it is rather generic. However, it is detailed enough to enable a doofus like me to get the grocery shopping done. I think what I love most are Heidi's editorial comments, especially the ones concerning marinara sauce and chocolate for her.

I started at 7pm, and left the grocery store at 8:30pm. The first 10-15 minutes involved taking back a multitude of cans and bottles for redemption, so I'm not really that slow, but damn! That was a lot of groceries. The only ones that gave me real trouble were spinach (it looks just like lettuce!!) and ricotta cheese (not in the cheese section.) And Heidi was right (as I already knew), listening to your iPod while you shop does give everything a nice rosy glow. I used to listen to my Walkman all the time when I shopped for myself. Granted, that didn't involve nearly as much. I actually had to leave the cereal aisle this time.

But even with my iPod, I still was reaching the end of my rope at the end, mostly because I wanted to be DONE and home.

So that was my night. Oddly enough, I have an odd sense of satisfaction rather than an overwhelming sense of having wasted my night. I'm going to have to remember that.
Posted by Dan at 2/12/2008 09:52:00 PM

I do a lot of our grocery shopping and I can tell you...that is an expensive list!

Dang! She rocks! Can I borrow her, like maybe, the second Tuesday of every month? I deplore grocery shopping.

Matt said: "I do a lot of our grocery shopping and I can tell you...that is an expensive list!"

My aim in life is always to go once a paycheck. It never works, but I'm always shooting for that. I've tried going bits at a time, but then I end up spending $50 a time and it's more than a big run anyway.

The goal is to guess what weird insistent cravings everyone will have and grab/accent them NOW so that we don't have a house full of food and still run out for something oddball. Which is why the pizzas are always on there in bulk, for the nights we go, "I don't want to cook. Let's order pizza." "No, there's one in the freezer. Pull it out."

Dang. That's fantastic. With my luck, I would've gotten to the store, read the list and saw the little blurb about the iPod a bit too late.

Full disclosure: I've never grocery shopped for the family on my own. Yet.