Nerdery Week: In the Nerdery, no one can hear you scream

I have an incredible fondness for all things Alien, even though it is probably not cool to like Alien any longer. But when have I EVER been about liking things that are cool? Regardless, there is no denying the coolness that is the Xenomorph, if for no other reason than the thought given to the life cycle of the thing. In the Nerdery, there are many things devoted to the Alien. Here are but a handful.

My most prized Alien possession is the original Kenner 18" Alien figure that was available for a very short time in 1979 before pressure from parents led to it being pulled from shelves. This was actually given to me as a Christmas present from my folks that year (were they cool or what?) In mint condition and in the box, these things sell for upwards of a few hundred bucks on eBay. Of course, mine went in the sandbox too much to be worth much of anything money-wise, but as far as sentimental value goes, it's priceless. 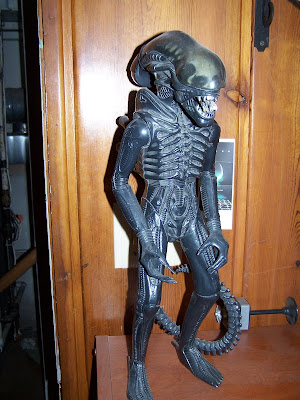 As you can tell, it is nowhere close to mint condition, but it's mine! And all the pieces are still there.

More recent acquisitions include this Warrior Alien that I picked up at Toys R Us in Cedar Rapids on a random stop. He doesn't stand up very well (much to my chagrin) but he does come with eggs and facehuggers. I still remember Anna being 3 years old and playing with this, calling the facehuggers "spiders" and the Alien "that scary guy." 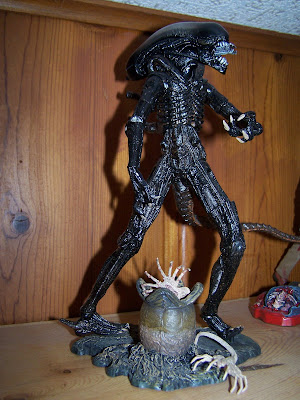 And then, one Christmas, Anna gave me the Queen Alien. Her goal that Christmas was to "give Dad something scary." She had help from Heidi, naturally, but the Queen was a perfect addition to the collection. It was more an Alien vs. Predator Queen than the Queen from Aliens, but it got the job done. I have been known to tell people reaching out to touch the Queen "Get away from her, you BITCH!" 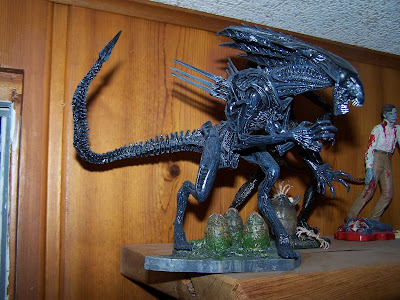 The next item was purchased thanks to a bonus check from work. Since I think that money like that is meant to have a least a small percentage of it spent on fun stuff, I decided to splurge and spend the nearly 30 bucks on a plush Chestburster. I love the Chestburster, making quite a splash upon its entry into the world and running completely on instinct, it's easily one of the best stages of the Alien's development. And what better than a plush Chestburster to cuddle up with? Well, suffice to say I have NEVER cuddled up next to the Chestburster. Instead, he is on display in the Nerdery, where Anna famously referred to him as "the baby scary guy." 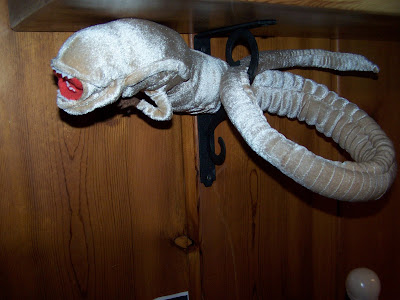 One final Alien related item, and another that dates back to my childhood. In my room that I shared with my brother growing up, this mounted Alien puzzle hung on the wall. My mom is forever sending stuff from days gone by my way so that I can make up my mind what I want to do with it. However, the Alien puzzle was one that I claimed quite vehemently. It now hangs right next to my desk. You can spot it in one of the first Nerdery posts I did, but here's a closeup for you. It has a companion puzzle in the King Kong one that hangs next to it (also from my childhood bedroom) but that's another post.

I also have a few Alien books as well (mostly the novelizations of the movies and a few of the original stories written based upon the movies) as well as the essential Alien Quadrilogy, which features a highly superior extended cut of the much maligned Alien3. Seriously, if you have a chance, check out that version. Even though David Fincher didn't participate so it's not truly a "director's cut", it's the closest thing we'll ever get to one.

That is much, much cooler than my Melanie "Scary Spice" Brown barbie doll.

Although Alien figurine and Melanie doll DO share a striking resemblance.

Dude. You're like my brother from another mother. I'm a huge Alien fan. I even got to work on Alien Resurrection during my short time in California.