Tonight's Nerdery Week post is going to be a quick one as I'm wiped out from work today. But fear not! I have tomorrow off work so I am going to endeavor to post several times. Until then, this will have to tide you over.

Matt asked me after I posted my second Nerdery photo (the one of the shelf in my office above the TV) what that big spider on the top shelf was. Why, it is none other than Shelob from The Lord of the Rings. 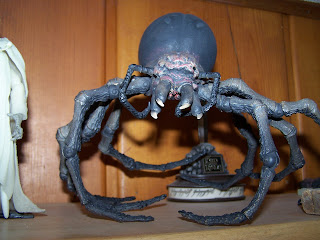 Shelob is yet another gift from my daughter (and my wife), who found her on clearance at either Target or K-Mart shortly after we moved to Ames. I have a special soft spot for Lord of the Rings stuff (but that's another blog post altogether) and Shelob is probably one of the coolest of the LOTR figures I managed to get. Although there is a Balrog for sale as well, but at $130, I just don't think it's worth the money!

However, Shelob is not the only spider-like creature taking up space. If you look carefully, you can also see a lesser known, but no less cool spider in the Empress of the Racnoss. This insane looking creature was the villain in the Doctor Who Christmas Special "The Runaway Bride." The Empress is probably the best thing about that episode, and the figure they created based on her is gorgeous. Oh, and did I mention, HUGE? 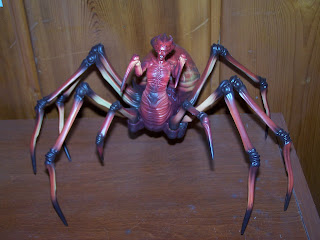 And a side view as well, to show what a big butt she has. 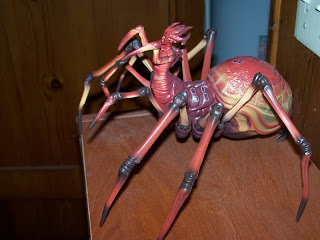 I bought the Empress at Mayhem Comics here in town just after Christmas with some Christmas money that was burning a hole in my pocket. I had wanted Heidi to pick her up in London, but the exchange rate was so bad, plus there was the whole having to bring her back to the States on a plane thing. Oh well, good thing I ended up finding her in town anyway.

i'm scared of spiders, birds and butterflys. It's an odd combination. PS your penis snowman pic has done the rounds now at my work!! Priceless!

I am so not liking your spiders... Ugh!

Spiders scare the living daylights out of me. The Shelob scenes were like torture, but really fun at the same time. Giant spiders! *shudders*

She is extremely ugly.

I must have a Shelob! Growing up I had a pet tarantula named Spike from 5th grade up until I was like 22 years old.

Man, I miss that furry sucker.

Needless to say, I love spiders.

Thomas, look no further than here: