We've come to the last day of Nerdery Week. What in the world will I ever find to write about next week? It's been great fun showcasing the things that solidify my nerd cred as well as seeing other peoples nerdery on display. Big thanks to TKT for coming up with the idea and kudos to everyone who played along.

What would a Nerdery Week post be without one devoted to my beloved zombies? Truly, they are the best of all movie monsters. They are shambling and slow-moving (well, the old school zombies anyway) and don't use weapons, yet they are every bit as lethal as other movie monsters. For me, there's something about the mob mentality of a zombie horde. They are a mass of undead beings with one purpose in mind - the consumption of human flesh. Gross, I know, but so many cool things walk the line between cool and gross.

As you might expect, my work area has a few zombies. Oddly enough, for all the pop culture figures I've managed to collect over the years, it wasn't until 2006 that I got my first actual zombie figure. I found it at a comic shop in Chicago, and it was Plaid Shirt Zombie from the original Dawn of the Dead. 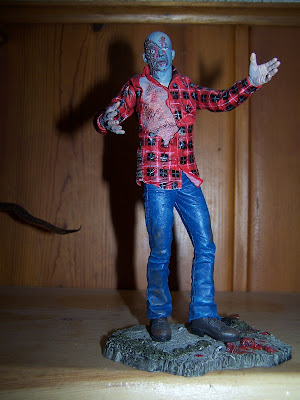 Not long after, I discovered that there was also a Flyboy Zombie (also from Dawn of the Dead), but sadly, everywhere I looked online, he was either sold out or not available or prohibitively expensive. Leave it to Heidi and Anna to find it. It was a Christmas present from Anna a couple Christmases ago. Just as she had done with the Queen Alien, she had wanted to get me "something scary." 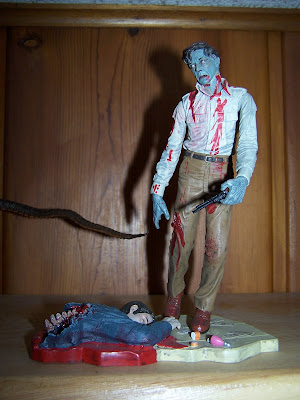 Anna's best comment on Flyboy Zombie is regarding the dead guy on the floor. Upon noticing him, she said "Dad, that guy doesn't have any legs!" Yeah, and he doesn't have much of a back either.

I also noticed recently that a third zombie in the Dawn of the Dead line has come out. This time, it's Hare Krishna Zombie. Undoubtedly, I will attempt to get that one as well. Could Nurse Zombie be far behind?

And as I blogged just after Christmas this last year, Anna's gift to me was Zombie Hulk from the Marvel Zombies line. Anna and I have a soft spot for the Hulk, mostly because when she was quite a bit littler, we used to watch Ang Lee's movie version of Hulk together (OK, we just watched the Hulk parts.) And since Zombie Hulk was one of three figures from the Marvel Zombies line, I used a bit of Christmas money to pick up the last two, Zombie Spiderman (complete with detachable leg) and Zombie Colonel America (when did he stop being Captain America?) 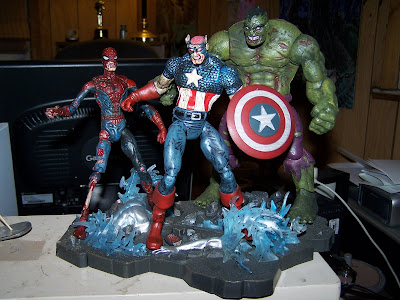 So today, as Nerdery Week wraps up, we may or may not have one final post. I'm seriously pondering doing a video blog entry (I have never done one of those before!) but I'm just not sure. We'll see how it goes. One thing I know for certain is that it is past time for the latest Marvel Zombies 2 issue, so I think Anna and I will head to Mayhem to see if it's there.
Posted by Dan at 2/23/2008 09:03:00 AM

Those are way too cool. I gotta ask, though: are you privvy to the graphic novel series 'The Walking Dead?' It's straight up zombies in those books and they're really, really quite good.

Also, I was in bidding contention for a custom-made zombie/hooker doll on eBay. The thing ended up going for $160 or something. Too rich for my blood.