Revenge can be so sweet

I've been meaning to post this for quite some time now, but the mood has never really struck me. But now, this morning, I look out the window and see the snow STILL COMING DOWN after we've probably gotten 4-5 inches already. But a quick look on Intellicast shows me that we're on the edge of the snow now so it'll be stopping before we know it and this afternoon, I'll be out trying to move the snow off the sidewalk and the driveway. After the last storm, I did the walk but not the drive, preferring to look the other way and just drive over it. I don't think I'm going to have that luxury this time around. So it seems like now is the time to write this. 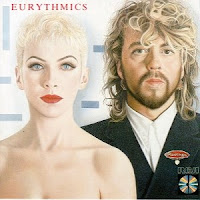 Anyway - recently I have totally and utterly gotten into the 1986 Eurythmics album Revenge. I have a long and interesting (to me) relationship with this album. I bought it on LP when it first came out - I think I was one of the few people I knew at the time still buying vinyl as most of my friends had made the switch to cassette tapes. But purchase it on vinyl I did, mostly on the strength of the lead single "Missionary Man." I knew other Eurythmics songs, of course - "Sweet Dreams" and "Would I Lie To You" were virtually unescapable at that time. But Revenge was the very first Eurythmics album I bought.

"Missionary Man" was a great song with an even better video - a bit "Sledgehammer" in some ways looking back on it now.

I actually had the 45 of "Missionary Man" before I bought the Revenge album - I loved buying singles back then and I think that a huge part of the appeal of iTunes to me is the fact that I really can buy singles again. Granted, they don't have the fancy cover art, but that's beside the point!

Well, back to Revenge - when I got it home, I honestly was underwhelmed. I don't know what it was - whether it had to live up to my enormous expectations or what it was but I really had a hard time with it. It did not seem as accessible as "Missionary Man" and the subsequent single "Thorn In My Side" had made it seem (not the first time in history that the singles from an album were not representative of the entire album.) I think, looking back on it, it wasn't pop enough - not enough "fast songs" or whatever - to really appeal to me at that age. Although I did really latch on to one album track - "A Little Of You" which remains in my top 5 favorite Eurythmics tracks.

So I forgot about Revenge, never really getting into it. It was only years later, after I was able to see them in all their brilliance on Savage, still by far my favorite Eurythmics album, and after two Annie Lennox solo efforts that I decided to revisit it. I picked up the CD used in Iowa City just after Heidi and I were married. And I liked it more than I remembered. But still, I was underwhelmed. For whatever reason, it wasn't speaking to me then again! And I'd bought the album twice now! (well, sort of - buying it used only half counts.) And so Revenge was a victim of the great CD purge when we moved to Ames - it became a part of the collection of the Washington Public Library. But before donating it, I did import it to my computer.

This brings us to the end of 2006 and for whatever reason, I found myself really wanting to listen to it. Fortunately, I didn't have to go buy it a third time. I listened to it all the way through on my iPod and although I had really warmed to a lot of the songs - most especially "When Tomorrow Comes" and "The Last Time" - I finally realized what a cohesive album it really was. OK, "Let's Go!" is a little bit ridiculous (forget about the preacher, man/Let's do it on the ground???) but overall, Annie is in fine voice and the songwriting really is top notch.

Perhaps it wasn't a problem with Revenge after all - maybe I just had to hit a certain point in my life to really appreciate it. Because listening to it now, it doesn't play like so many albums from that time period do for me - as cheesy high school nostalgia - but rather, it is like an album that just came out six months ago and is becoming a part of my musical "being" for lack of a better word. Sure, I remember the videos for the singles, but really, it plays very well for being a 20 year old album.

I love 'When Tomorrow Comes', it's a really underrated song

I remember a rock station (!) playing "Take Your Pain Away" and I put it on a cassette before the record was released (I was between my jr and sr year, btw). That was the first song to hit me, but I would have overlooked it had I not heard it prior to the full release.

When I was a freshman in college I (quite subconiously) fell for someone from afar and would play "Miracle of Love" over and over again.

Now that I am older it's "I Remember You" that really sticks out. Ohhhh we were so young..

As I have said to you before, I totaly agree with your distaste for "Let's go"!