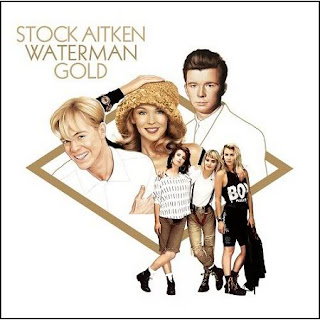 I was on my way home this morning after dropping Anna off at school and a song came on my iPod that got me to thinking about Stock, Aitken & Waterman. Most of those who read will immediately recognize SAW as the UK songwriting and production team that was responsible, most notably, for Kylie's first four albums. When I was in high school, it was amazing how much SAW I gravitated towards, most of the time not even realizing it. The song that I heard on the way back this morning was a SAW song and it got me to thinking about my favorite non-Kylie SAW songs. There are so many to choose from, but I narrowed the field pretty successfully. There are four and if I really wanted to subject Matt and Bess to unfiltered Dan music, I would submit all four for the next DMB CD. (speaking of, when are we doing that?)

Donna Summer / This Time I Know It's For Real
This is the song that prompted this post, so I guess you can thank 1989 Donna Summer for it. I was always impressed that Donna Summer got radio airplay in 1989 as it was well past her disco heyday. She was a natural fit for SAW and her bigger than life voice complemented the rather simple melodies and songs surprisingly well. Say what you will about SAW, but can they write a chorus or what?

Boy Krazy / That's What Love Can Do
Released in 1993, I always thought that this sounded like Kylie. You see, I was completely oblivious to Kylie's continued success overseas so I figured she had completely disappeared. I don't think I actually figured out it wasn't until many years later, although I think I knew in my heart of hearts that it wasn't - not squeaky enough! (said with love and affection.) I always loved this song but don't think I got my hands on it till the Napster free-for-all.

Laura Branigan / Shattered Glass
I think this was probably the first SAW song I ever heard. I bought Laura Branigan's Touch album on the strength of "Shattered Glass." Too bad it ended up being one of only two SAW tracks - the other being "Whatever I Do." I always felt kind of bad for Laura Branigan. The record company really never knew what to do with her. Was she a power ballad belter? Was she a dancefloor, high NRG diva? Regardless, "Shattered Glass" is a highlight even though it stalled out just outside the top 40.

Bananarama / I Can't Help It
Fresh off the success of "Venus," Bananarama turned their follow-up album WOW! over to SAW. The best track off that album is still the first song and kick-off single "I Can't Help It." Containing my classic misheard lyric "I got debated by your heartache" (it's really "I'm captivated by you honey"), the cheesiness is sealed by the line "Boys say, they say I'm good enough to eat (manger)" How can you resist French in a song? Watching this video now, I'm amazed at how much they were clearly playing to their main demographic even in 1989.

As a big SAW fan I totally get on board with the inclusion of the Nana's and Donna Summer. I'm not too familiar with "Shattered Glass" but I have it on the PC so will be checking it out in due course. I've never heard of Boy Krazy though, must look into them.

A non-Kylie SAW Top 5 from me would probably look something like this :

1. Donna Summer - This time I know it's for real
2. Sonia - You'll never stop me from loving you
3. Bananarama - I heard a rumour
4. Brother Beyond - The Harder I try
5. Lonnie Gordon - Happenin' all over again

I flirted with "Happenin' All Over Again" but it ultimately didn't make the cut. I do love that song as well. And as was pointed out by ChartRigger - I had no idea that "You Think You're A Man" was SAW.

Aw Yes. There was something about the SAW/PWL sound that actually gave me physical pleasure. It made me tingle. I don't tingle anymore, but it can sure lift my spirits. Shocking that they only had 13 number 1's out of all the songs that charted.
These are all great songs, but I'm afraid I would have to put all 10 of Donna's songs ahead of anything else. She put soul and emotion into them, making it more than just bouncy fun. Something very rare for the artists SAW worked with.
" That's What Love can Do" has held up very well over the years. It sounds like something that could be released today, with some slight updating.
Again Hazel Dean is trumped by someone with 100 times more talent. Laura sings the hell out of those 2 songs.
I'm afraid before anything by Bananarama I would have to put a Samantha Fox tune or maybe even "that" song by Rick Astley.
There are so many. I may have to Tweet It Out.

great post Dan. God I loved SAW. I still play them regularly - Kylie, Jason, Bananarama, Donna, Hazel, Sonia, Big Fun, Sam Fox, Sinitta, the list goes on. It's endless pleasure that never gets old - much like the Abba catalogue (i'm not comparing them, i just think both are the catalogues I return to most for roadtrips etc).

Love this post, and like you, I'm always surprised how instantly I was drawn to SAW tracks, even without knowing it. My top 5 non-Kylie cuts would be:

And a dishonorable mention, since I hate to admit that I like the song, is Pat & Mick - Use It Up and Wear It Out.

Dwayne - could you imagine if SAW had produced Anne Murray's version of "Who's Leaving Who?" I think I might have died and gone to heaven.

Paul, John - yes, there is something about the SAW tracks that even though they got very predictable and same-ish, really connected to the unabashed pop lover in me. I am going to have to search out some of these other songs that I haven't heard of that have been mentioned. SAW Gold has too many songs that I already have!

Also, no idea that "Showing Out" was a SAW production, although all the telltale signs are there!