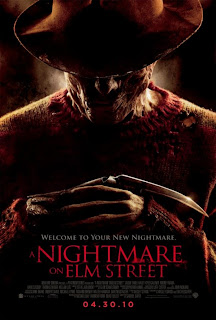 It's hard for me to get my head around the fact that a lot of the movies I grew up with are at least 25 years old now. It doesn't seem possible but really, when you think about it, being as old as they are makes them prime target for being remade for a modern audience. No genre has seen this happen more than horror. Many of the classics from the late 70s and early 80s have been revamped and reimagined - most notably Rob Zombie's take on Halloween, a new and not-necessarily-improved Friday the 13th and a new version of Dawn of the Dead, now complete with fast zombies. Of these new versions, I approved of Dawn of the Dead, had mixed feelings on Halloween and honestly, haven't even seen the new Friday the 13th so I can't really say much about it.

A remake of 1984's classic slasher flick A Nightmare on Elm Street seems like such a bad idea on paper. The original is pretty much perfect and seriously, why mess with perfection? Because we can, that's why! Freddy Krueger has been reinvented for the new millenium and everything old is, well, old again. I'll admit that I was intrigued by the remake but really didn't know what a remake could add to the story. When the scathing reviews came in (13% on Rotten Tomatoes) I felt justified. In a move rather unlike us, my friend Matt and I completely skipped it when it arrived at the dollar theater. Surely with reviews like that, it wasn't even worth a lousy $1.50. But when it finally hit DVD, I figured what the hell, I'll give it a try.

Clocking in at a measly 93 minutes, I'm still not quite sure what to think of this movie. As an homage to the original, I liked it. It is certainly nothing to write home about, but I thought it was a capable horror film that honored the intentions of the original movie without vomiting all over it. Nancy is still the main character, except Glen is now Quentin, perhaps to reflect that this is no longer 1984. The body-bag-in-the-school-hallway scene is still there, albeit much later in the film, as is some of the other imagery - particularly when it came to the death scenes.

Perhaps the biggest difference is that Freddy is no longer a child murderer but is, instead a pedophile. Apparently, this was Wes Craven's original idea for Krueger, but it was scrapped as there was national attention on the McMartin preschool case, so instead, he was just a murderer of children vs. a sexual abuser of children. No matter, he's still the bastard son of a thousand maniacs. Robert Englund, who played Freddy in all the original installments of the series, is replaced by Jackie Earle Haley who puts a much more menacing spin on the character. Say what you will about the original movies, but by the time you got around to A Nightmare on Elm Street 5: The Dream Child, Freddy had been reduced to comic relief. As my friend Missy famously stated at the end of that film..."THUMBS DOWN! I've been more scared at a Disney movie!" Alas, she was right. At least the new Nightmare was scarier than that.

Usually when I see these movies, I'm not much of a stickler for reality. This is especially true for a film like A Nightmare on Elm Street since so much of it takes place in dreams and sometimes, the dividing line between the dream and reality is nebulous at best. But Quentin stealing epinephrine syringes from a hospital crash cart and using them to stay awake REALLY bumped me out of the movie. It will not work, not even in a dream. What it will do is speed your heart up and make you jittery for a little bit. Even if it did manage to keep you awake, the buzz would be short-lived as the half-life of epinephrine is 2 minutes. Did they not have medical consultants on this film? Or were they just that lazy?

Be that as it may, I still recommend the film as I felt it didn't disrespect the original film and had a few pretty good scares. The final scare really took the cake, even though I was half expecting it based on the end of the original movie. Just don't expect an Academy Award winner (or medical accuracy for that matter) and you'll be good. Rumor has it that this film made enough that there's going to be not one but two sequels.

Lazy. And probably no medical consultants. Both.

Yeah, that was kind of my thought too!