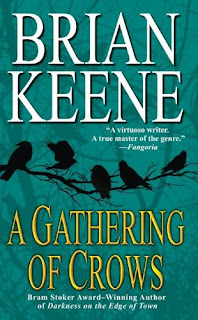 We've all seen them - those rural small towns that seem to be hanging on by a thread (and likely a prayer.) Western Iowa, in particular, is littered with them. But what makes a a struggling town a ghost town? If you believe horror writer Brian Keene and his latest release, A Gathering of Crows, it's five otherworldly creatures that can shapeshift between a human-like form and that of a crow. They gut (both literally and figuratively) those small towns that have been completely forgotten. And tonight, they're headed into Brinkley Springs, West Virginia.

I've read Brian Keene's zombie fiction (most notably, The Rising and City of the Dead) but had not branched out into his other horror fiction. I saw this at the library and was intrigued enough by the premise that I picked it up and started reading that very day. In 3 days, I was finished - that's how sucked into the story and characters I was.

The story starts by introducing us to some of what will become the main characters. We don't know it yet (although you can guess it) but all their stories will intertwine in some way by the time the book is over. Sticking out like a sore thumb amongst the locals is traveler Levi Stoltzfus, a formerly Amish man who has been disowned by his family for dabbling deeper in the dark arts than his father would allow. As these five demons arrive in Brinkley Springs to feed on the souls of everything that's living, he's their Obi-Wan Kenobi. He is their only hope.

Keene will be one of those writers that's dismissed because he writes genre fiction, but really, he's a great storyteller and fantastic at setting up a story. He makes the characters very real and believable. Sure, it's an easy read, but what's wrong with that? Is there a law somewhere that says that everything good has to be "literary" and "mature"? If there is, I'm not interested. Keene's writing is over the top and gory and stomach turning at times, but THIS IS HORROR FICTION. What do you expect?

Like most horror stories, I felt like the resolution of the novel was a bit underwhelming - Mushroom World really didn't work for me, but oh well. Keene is good at what he does and I applaud him for daring to set up a Lovecraftian mythology that spans most of his novels to varying degrees. That is no small feat (says the husband of an author that has a 7 book series she wants to write.)

Horror fiction can be so bad, but Keene is definitely the cream of the current crop. And A Gathering of Crows (incidentally, known as a "murder") is well worth the time of anyone who likes a fast paced story with more scares and gross-outs than you can count. I heartily recommend it. I actually recommended it to a friend while I was reading it, telling him "if I knew how to buy this for you and send it to your Kindle, I would so be doing that right now."