Zombies of a different color

Lance tweeted to me tonight that he was watching the 2004 remake of Dawn of the Dead which, for those that don't know, features a zombie baby. This got me to thinking - most zombies in zombie movies are interchangeable. They're slow (or fast, depending on the movie), decomposing, bloody and looking for human flesh to consume. It's not like them to stand out in the zombie horde. But there are some that have - zombie baby being one of them. Here's some other ones I thought of. 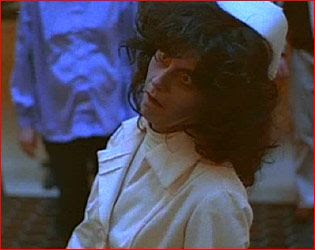 1) Nurse Zombie (Dawn of the Dead, 1978)
Nurse Zombie is easily the most memorable zombie from the original Dawn of the Dead. However, I've never been able to figure out what a nurse was doing at the mall in full uniform. Did she do the zombie shuffle from a nearby hospital? Was she at the uniform shop? The world may never know. 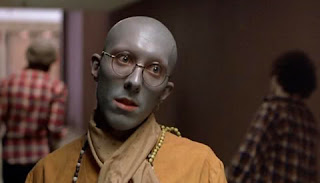 3) Hare Krishna Zombie (Dawn of the Dead, 1978)
Another rather unforgettable member of the undead mall walking club in Dawn of the Dead, Hare Krishna zombie helps us to remember that yes, this movie was made in the 70s. The only thing that gives away his zombie nature is his shuffling gate and faint blue skin. And although it's been a while since I've seen the movie, I'm pretty sure that he's the one that first finds the heroes' hiding place although he ultimately does no harm. There is an action figure of this that would go quite well with my Fly Boy Zombie and Plaid Shirt Zombie from the same movie, but alas, I have not yet purchased it. 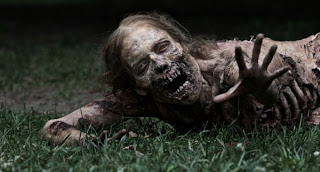 4) Half-a-girl Zombie (The Walking Dead, 2010)
One of the first real zombies we see in the pilot of The Walking Dead, I was amazed to find out that this zombie, who is nothing but head, arms and torso was pretty much entirely done with CG. There is an actress there, made up and snarling and what not, but the bottom half of her has been green-screened out a la Lt. Dan's legs in Forrest Gump. When we originally watched it, we weren't sure if that was an amputee or if it was CG or if somehow they had cleverly disguised her lower half so as to give the image of a legless zombie. It showed that the best kind of CG is the CG you don't know is there. 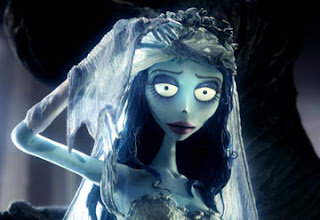 ) Corpse Bride (Corpse Bride, 2005)
If you really think about it, Corpse Bride is a zombie movie. It's not one in the traditional sense, but the Corpse Bride is a reanimated corpse, right? And Scraps, the all bones dog - is that a zombie dog? Animals are usually immune to zombification, but as Brian Keene has pointed out, anything's possible when it comes to living things being zombified. The Corpse Bride makes this list if, for no other reason, than because she is the best looking zombie I've ever seen.