I spent a large chunk of today in Oskaloosa, IA. It was the site of the NaNoWriMo write-in that the Central Iowa Authors (CIA) was putting on today. It was kind of nice to get out of town for a bit and then there was the added bonus for Anna that she got to go see her grandma who took her to Jumpin' Jim's Jungle in Ottumwa for a pre-birthday celebration. 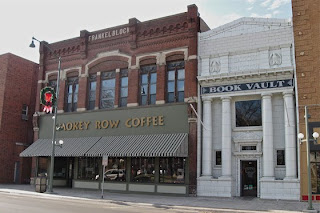 But Heidi and I spent all our time today at Smokey Row. Smokey Row is an Iowa based coffee shop that started out in Pleasantville, IA in 1998. Since then, it's opened three more locations, the most recent being in Des Moines. It is one of the more frequent locations for CIA write-ins during NaNo. It's also one of our favorite spots in all of Des Moines. What Smokey Row does right (in addition to coffee and food) is atmosphere. Everything feels so retro, right down to the metal signs advertising products like Hires Root Beer, Folger's Coffee (celebrating 100 years, 1850-1950) and Pepsi-Cola. It has high ceilings, wooden floors and copious amounts of seating. The Oskaloosa Smokey Row even has a stage for live entertainment. All in all, you really can't beat it as far as central Iowa coffee locations go.

Heidi wrote pretty much all day. She's writing not one but TWO 50,000+ word novels for NaNo this month. The woman is amazingly prolific. You can follow her progress on the official NaNo project here (the 3rd book in the Special Delivery series for those that love those characters) and the second one here. Me, I was mostly along for the ride. And the coffee.

You might think that I had a bit of a boring day at Smokey Row, surrounded by writers and me with nothing to write. I thought about blogging, but the wireless was so inconsistent and crappy that I quickly gave up on that idea. I suppose I could have used my phone, but the mere thought of typing a whole blog post on my phone sends me into apoplexy. Clearly, that wasn't going to happen.

I did get a lot of reading done. With a bit of discipline and stamina, I'll be able to get to 25 books by the end of the year without too much difficulty. There was also a nap involved. I put my iPod on and since Heidi was sitting on the floor with the laptop, I snuggled right up against her and fell into what I would consider a rather deep sleep for a public place. I told Heidi to jab me in the kidney if I snored. I must not have or else she had her headphones on and didn't hear me. I think that was probably my favorite part of the whole day, truth be told.

After the write-in, we met my mother-in-law and her husband who had brought Anna back up for a small birthday party, complete with a horsehead cake. Heidi's brother Hans and his wife Alicia were also there, as was our doctor friend from our Washington days, Lynette. It was good conversation and nice to see everyone again.

We probably spent a little too much money but you have to live. The folks in CIA are some of the nicest people I know and it's always fun to get together with them. Not many of them live in Ames so it's always a treat to see them.

We have a birthday party to attend to tomorrow with eight 3rd graders in attendance. The birthday girl doesn't officially turn 9 until Monday, but the weekend has been the chance to get the celebrating done. I still can hardly believe she's nine, but time continues to march on.

An aside: I'm extremely proud of the fact that we are on day 13 of NaBloPoMo and I haven't missed a day. Last year, I missed a couple days but they were offset by the fact that on two days, I posted twice. It's harder to blog every day than you might think! The last few days I have been getting the posts in just under the wire, reminding me of my graduate school days when the lab reports were due at midnight on Friday night each week. So far, I'm happy with the quality of the posts and while some are definitely more throwaway than others, it's been a fun exercise in daily writing. I could not do this every month, but it's a fun experiment to try.
Posted by Dan at 11/13/2010 10:26:00 PM