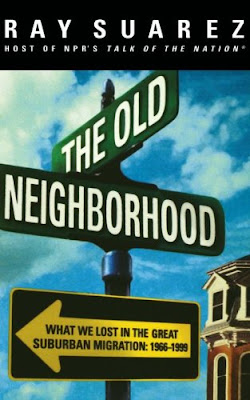 I have a real fondness for books about our modern age. The only trouble is, as I have mentioned before, that there is so frequently a temptation to write about a period of history before a sufficient amount of time has elapsed to really see it objectively. I found this to be a bit true with Ray Suarez' The Old Neighborhood: What We Lost in the Great Suburban Migration: 1966-1999. For the 1966 part, yeah, I think we have good perspective but not so much for the 1999 part - especially considering the book was written in 2000. I sometimes think I missed my calling as a social scientist, but really, it's better that I just read about it in my spare time rather than try to make a living at it. And I'm much better with pharmaceuticals than I would be with the statistics that are required for this kind of research.

The Old Neighborhood examines the late 20th century phenomenon of "white flight" - the exodus of middle class white people from the cities to the suburbs. Their departure was frequently prompted by the arrival of minorities in the neighborhood. In what was really a vicious cycle that fed on itself, the first minority families would move in which would prompt the original white residents to move before their property values went down. More minorities moved in, more whites left as did local businesses and a neighborhood that was once was solidly middle class went into free fall. The subsequent loss of tax revenue affected local schools and other public services. Those left behind lived in an area that was a mere shadow of its former self, largely due to the fear of the unknown and the different.

What I liked about Suarez' take on white flight was rather than take a grim, textbook-like approach, he made it very personal. He examined many different cities in the book and in each, he interviewed many people that lived in the city or in the neighborhoods that had deteriorated. I also appreciated the short history lesson that he gave about each of the cities he stopped in - I learned a great deal from this as the only city in the book I claim any kind of real familiarity with is Chicago and even there, I learned something. The book did get bogged down in the interviews a little bit. They SO could have been edited, thus making the book a little leaner and more effective.

I've find it sad what has happened to our cities over the last 50 years. Across the nation, miles and miles of suburbs surround donut holes. Thankfully, this has been improving some as reinvestment in city centers has been occurring. Even in our capital city of Des Moines (not featured in the book, obviously), there has been a vigorous attempt to revitalize the downtown area and draw residents to the area vs. the daytime population of office workers. This has met with considerable success, so much so that downtown Des Moines is no longer a ghost town. I wonder how different things are in the other cities profiled in 2010 vs. 2000 when this book was written.

An interesting book, but again, could have been much shorter and would have gotten the same point across. That's kind of the trouble with books like these - they really overdo it after a while. I found myself skimming toward the end of the book which is never a good sign.