Hello you fool, I love you 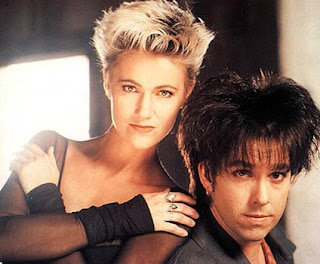 When I was taking Anna to school this morning, Roxette's "Fading Like A Flower (Every Time You Leave)" came on. (An aside: any song with a parenthetical portion is automatically better than it should be. It sure helped out a boatload of Samantha Fox songs.) I hadn't heard this song in forever and I had forgotten how much I really like it. It's kind of tied to a road trip I made to Kansas City in 1991 with a group of friends. It was all over the radio at the time, riding the wave of "Joyride" which had been a pretty big success despite the fact that I was always a bit lukewarm to it.

But more than that, everything Roxette will always remind me of the woman with whom I've shared my life for the last 15 years. Now that I think about it, today is probably 15 years ago to the day that we met. Heidi and I met in early November 1995 at Jeff Tadsen's housewarming party - a party that both of us almost missed for various reasons and had that happened, who knows WHAT the world would look like now. But the reason that Roxette and all their Swedish cheese will have the Heidi connection is because Roxette was pretty much the ONLY pop music that Heidi listened to when I met her. Was Roxette even having hits in 1995? I can't remember. In a sea of Deep Forest and Clannad and Enya and other what we refer to as "woo-woo" music, there was Roxette. Clearly, I had work to do.

It wasn't because I thought her choice of Roxette was a bad one. I always liked Roxette enough, but never enough to actually purchase any of their albums. They were a staple of my senior year of high school, with hits like "The Look"(Mary, I owned the cassingle of that song!), "Dangerous", and "Dressed for Success" which my friend Holly always referred to as "Undressed for Some Sex." I was less impressed with the song "Joyride" as I found it rather annoying but all the other singles from the album Joyride were pleasant, especially the previously mentioned "Fading Like A Flower."

Within the first couple months of dating (which commenced after the three weeks it took me to call her after our initial meeting - YES, SHE STILL MARRIED ME. It's amazing.) I had made for her a mix tape of the definitive Madonna songs. Now, that tape would be woefully incomplete. Within a few days, she had responded in kind with a corresponding mix tape of the definitive Roxette. It was with that tape that I was exposed to some of Roxette's deeper album cuts and how I discovered what would become my favorite Roxette songs. They were all dubbed from the tapes of Roxette's albums which blew me away because I thought that dubbing from a tape had gone the way of the dodo bird by that time. I wasted no time in going out to the now-defunct BJ's Records in Iowa City and I picked up every last one of Roxette's albums for her on CD. If I recall correctly, it was part of a Valentine's Day present. And as a bonus, inside the copy of Crash! Boom! Bang! was a live bootleg album. This excited me more than anything else and Heidi had a good poker face and put up with my excitement because she has never really been a fan of concert recordings and really couldn't have possibly cared less.

But on that tape was the Roxette song "Run To You" which, at that point in my life, spoke very strongly to me and really summed up how I felt about the fledgling relationship we had at the time. I didn't know there was a video for it until just this morning. Naturally all Roxette videos on YouTube have embedding disabled (seriously?) but I did find it elsewhere.


Roxette - Run To You

I don't know what happened to "The Definitive Roxette" mix tape. I know I wouldn't have consciously gotten rid of it. It's probably around here somewhere just waiting for me to find it.

It's pretty safe to say that had I not met Heidi, I wouldn't have spent the last hour listening to Roxette. And honestly, I can't imagine this morning without it.

The cassingles are still under my bed in their wooden case. :) I can't seem to get rid of them.

I parted with mine in a fit of decluttering and now I wish I hadn't!