They wrote the book

Every year, we get together with our closest friends on a weekend before Christmas and celebrate the holidays in style. We always get Christmas crackers from World Market and Heidi makes a big dinner. People bring food and presents and we all really get into the Christmas spirit. And there are always many many pictures of us looking ridiculous in the paper crowns that come out of the Christmas crackers.

Heidi had been on my case to make a Christmas list this year because we all exchange gifts each year. She took to publicly shaming me in an e-mail loop between all of us to get me to do it. I finally did it this morning before we left for our Thanksgiving travels. We have a great time with our little gift exchange because finding unique items that match the other people's personality is really the challenge. Anyone can buy a summer sausage or a popcorn tin. Making the gift match the recipient is the really tough part. 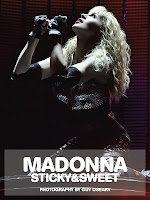 One of the things I really want this year is something that I denied myself for the last couple of years. In 2008, at the Sticky & Sweet Tour, I bought the Guy Oseary's Confessions book which featured hundreds of shots from Madonna's 2006 Confessions Tour. It was a lot of money and is basically a photo book (not much text to be had) but the photos are brilliant and a good way to remember the actual tour as the tour book you buy at the concert never has any photos from the show in it. Well, after the Sticky & Sweet Tour, Guy Oseary was at it again and released Sticky & Sweet early last year. It's not something that I can justify buying on my own, so what better reason to put it on my Christmas list? I am really hoping that I get this this year as it will be such a good companion piece to the already purchased Confessions book. I really enjoyed that tour and having some high-quality professional photos of it just seems right. 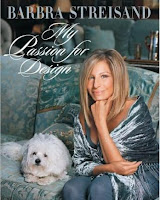 Another diva has a book out this year but as far as I'm concerned, she can keep this one. Barbra Streisand has written a book. I was talking to my friend Jeff about it the other night. Streisand is at the point in her life where she really needs to write her memoirs. So many books have been written about her life - all of which have been unauthorized to the best of my knowledge. I think that hearing her talk about her career and life in her own words would be fascinating. So when I heard that she was writing a book, I was pretty excited. When I found out that it was about interior design, my excitement level dropped to a negative level. Instead of writing the story of Streisand by Streisand, she's written My Passion for Design. It seems like the ultimate in narcissism and Jeff and I laughed about it uproariously on the phone the other night.

Seriously? Barbra may be an actress who sings, but now she designs as well? Maybe she'll still write her memoirs, but as far as I'm concerned, this is a missed opportunity. I've followed her career for a long time and I haven't even the slightest bit of interest in it. She's foisting this $60 doorstop on a market that I don't think really exists. I certainly would never buy it and I can't think of many people who would.

But the one thing these women have in common is their dogged determination to do whatever the hell they want. So if Madonna wants to continue to not record music in favor of filming a movie that no one will see, far be it for me to stop her. And if Streisand wants to write about the carpets and architecture of her homes rather than writing her memoirs, well, I guess that's her business.