Are they still there for us? 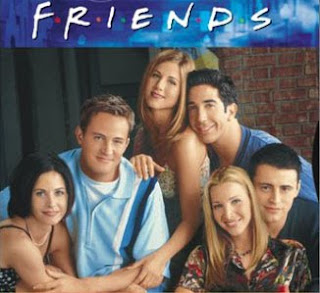 My sister and (soon to be) brother-in-law were cracking me up tonight. They were taking a page out of the Dan & Heidi playbook and were pseudo-conversing on Facebook. My sister was taking great pleasure in the fact that she "got Andrew to admit that Star Trek: The Next Generation was the best series of the 90s and that Friends totally doesn't hold up." And Andrew said something to the effect that "Ross had the most punchable face on television." I'm not sure how I feel about the first statement (um, X-Files anyone?), but I totally agree with the second point. Ross mostly just pisses me off and that was before he all the characters became caricatures of themselves and Ross' neuroses went off the chart.

I will admit that I only sort of watched Friends while it was actually on TV. Where I really learned to appreciate the show was in syndication starting in roughly 1999. We would watch it every night at 6:30 after the local news, but heaven forbid we actually remember to tune in and watch the new episodes. When Friends and Must-See-TV Thursday night on NBC were at their peak, it was very like me to hold that which was terribly popular with disdain. I still do that sometimes but to a much smaller degree than I used to and when I do it, I usually get called on it by Heidi. It was the constant onslaught of reruns that eventually wore me down. And for the most part, I think it's a pretty funny show that is by and large well written and well acted (save some of the latter seasons.)

But to address my sister's assertion - does Friends hold up almost six and a half years after it went off the air? To be honest, I actually think it does, and better than many of its contemporaries. Like so many sitcoms, it's important to remember that it is ultimately a product of its time. And for Friends to hold up, you HAVE to keep that in mind.

The greatest argument that Friends does hold up is that it really captures a part of the 90s zeitgeist. It is 90s nostalgia at its finest and only during the final few seasons, when the writing kind of fell apart and (as I mentioned) the characters become extreme versions of themselves does the connection to that zeitgeist feel a little bit forced. For what Friends really represents is a 90s nostalgia that never existed - it's kind of a modern day Leave It To Beaver. Maybe it rings a little truer in more urban areas, but let me tell you how I did not spend my 20s and early 30s hanging out in a coffee shop waiting for my friends to show up. No, TV is not reality, especially a show like Friends, but I think it plugged into the kind of community that a lot of people our age really wanted but were having a hard time getting. Who wouldn't want a group of close knit slightly neurotic (in a good way) friends to be with and to have basically as a "family of choice?"

When Heidi and I were rewatching Friends on DVD (which took about half the time that it took for the show to actually air), there were a lot of times that I found myself a bit wistful for what I knew really never was. I always wished that I knew someone like Phoebe. I always loved (and was frequently a bit jealous of) the relationship between Joey and Chandler which was probably one of the best examples of a bromance before bromance was a buzz word. Even self-absorbed Rachel and massively OCD Monica were very oddly comforting. By magnifying their quirks, the writers somehow managed to make mine feel a bit smaller.

And then there's Ross. *sigh*

Whenever I do one of those "which Friend are you?" quizzes, I always, without fail, get Ross. And that kind of ticks me off because I don't think that I am in any way as pathetic as Ross. Ross is so much a victim of his life's circumstances which is something I try to avoid. But when I'm honest with myself, I'm so not a Chandler (everyone always wants to be a Chandler) and hell no, I'm not a Joey. So that leaves Ross. There are so many episodes of Friends that have massively painful Ross moments, and they usually aren't the focus of the episode. It's always some dumb plot point that relies on Ross being clueless or socially inept and it's usually regarding his rather hapless efforts to find love. These moments multiply exponentially in the final seasons to the point that it really is just so much farce. I have blocked a lot of them out, but so much of the time, it was like watching a horror film through your fingers.

So yeah, Andrew is right. Ross is the most punchable face on television, but I don't think that just because I keep getting him on a stupid Facebook quiz means that I'm equally punchable. All in all, if I had to pick, I'd rather be Paul Rudd as Phoebe's husband Mike Hannigan (aka Crap Bag) than any of the the three main Friends. But who in the hell DOESN'T want to be Paul Rudd? The guy is crazy cool.

If it hadn't been for Wendy, this post would never have happened. Honestly, I don't usually think about Friends this much. But now I want to go rewatch the series. Or maybe just the one in which Chandler is trapped in an ATM vestibule with Jill Goodacre.

Screw Friends. NEWSRADIO was the best comedy of the 90s.

NewsRadio never got the audience it deserved. We liked that show and watched it streaming on Netflix a while back. Another good example of an ensemble comedy that really worked.

Brian and I watch it EVERY night before bed. We have for... five years, maybe? There is rarely a day that goes by without one of us quoting that show. :)

I still love the episode that showed the 30th birthday celebrations of all the friends. At every gathering, Joey would scream, "Why God?! Why?!" Sometimes I feel that way. I think I've seen every episode multiple times.

One of my favorites is still "The One With The Nap" where Joey and Ross take an inadvertent nap together.

And who can forget Ms. Chanandler Bong?