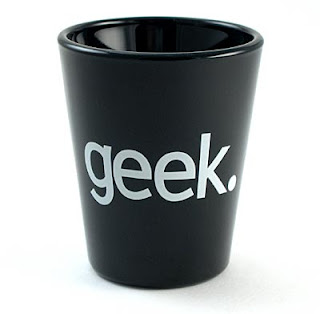 OK, it's Saturday night and it's confession time. I've told a few people this already, but it's time to come clean to the whole internet. Actually, now that I think about it, this is pretty appropriate for a Saturday night.

Confession: I have never, not once in my 38 years on this planet, done a shot. All those years of college and fancy book learnin' and somehow or another, I managed to get through it without doing even a single shot. I told this to my wife and she was absolutely incredulous. When I told this to a couple of my co-workers, they accused me of lying. When I finally convinced them that I was telling the truth, one of them told me not to worry because he had done enough for the both of us over the years.

But really, when you get right down to it, is this the alcohol equivalent of being the 40-year-old virgin?

My shot-lessness both was and wasn't something that happened by design. I have never been a huge drinker. I never touched a single drop in high school (shocker) and even in college, I didn't really partake a tremendous amount. The first beer I ever had was 6 months shy of my 21st birthday and the only reason I drank it was because it was one of those situations in which it would have been rude and awkward to refuse. I only had a few sips of it - looking back, it was probably something nasty like PBR or Bud Light - so I look at my first REAL beer as occurring 3 months later around St. Patrick's Day when I partook of green beer with my friends Rick & Ellen at Diamond Dave's in Old Capitol Mall. I won a Firewater Cinnamon Schnapps T-shirt that night and Rick (or was it Ellen?) won a huge green foam top hat. It was a fun night, one of the fonder memories I have.

I would go out with my class a lot - usually after a brutal round of exams - but it was usually a toss up as to whether or not I would have a good time. It was usually about every other time that I went out that I had a good time. I quickly learned about of the positive effects of being just slightly buzzed vs. completely hammered and would usually drink just enough to feel that buzz and then switch to water or pop. It helped me to lower my inhibitions and work past my shyness and awkwardness that really got in my way without causing me to make a complete ass of myself. Those were the fun nights. The nights that I was feeling shitty about myself or feeling drained being around people were the nights that I would hang back at a table while the rest of my friends had a great time. Sometimes, not even the 80s music could coax me out of my funk.

Doing a shot never really crossed my mind during those years because I equated hard liquor with "loss of control" and I was (and still am, but to a smaller degree) all about control. I like the slight loss of control that a buzz gives, but flat out drunkenness still frightens me a little, even at my advanced age. I have also never been a fan of undiluted hard liquor. To me, it seems like drinking that kind of stuff is akin to opening up a bottle of rubbing alcohol and downing a swig of it. Or maybe drinking from the gas pump. Heidi was double-dog daring me the other night to do a shot of the cheap-ass butterscotch schnapps we have and I wouldn't do it. Old habits die hard.

So yes, somehow I got to be as old as I am and have still not done a shot. And now that I am to the point in my life where I am reflecting on that fact, it seems like there are as many different kinds of shots as there are stars in the sky. I've had a lot of recommendations from the dumbfounded people I have told. Someone at work told me to do Liquid Cocaine. I don't even know what that is supposed to taste like, but they told me it was good. My hunch is that it is what might be categorized as a "lightweight shot" and that they are trying to break me in easily. Beyond that, I have no idea what I would even like. Are there any suggestions from the peanut gallery?

The reason I ask is because I'm going to change this - sooner rather than later. Maybe before the year's out, but more likely in 2011, but mark my words. My shot virginity is going the way of the dodo bird.

Surely I'm not the only one in this situation...if you are in the same boat as me, please let me know so that I don't feel so alone in my patheticness! :)

I rarely drink. My first drink ever was my 30th birthday, under great peer pressure.
To this day I have yet to pay for any alcohol with my own money. It tastes like crap. Beer, wine, "the hard stuff", none of it is tasty. The only reason to drink it is to get a buzz, and sometimes that is worth it. Especially for those of us who shrink in big groups. We need the relaxation help.
My advice is to stay away from tequila completely. It tastes like you are drinking from your gas tank.
I am not up on any of the fancy shots but I doubt you will find anything you will be able to say you like.

Cheers to your virginity expiration!

you could do one with your sister and new brother at our wedding:)

Amaretto and baileys is always a good one. Failing that, goldschlager. I can't believe you've never had a shot, but then you'll be reaping the rewards as you get older for not drinking!

That said, good luck with your quest to make your first one perfect.

Andrew, I think your wedding would be the perfect time and place. Let's plan on it.

Dwayne/P/Brendan, I am far from a teetotaler but I also do not drink to excess. I was talking to a friend last night and, as he put it, the reason to drink a shot is to get drunk as quickly as possible and since that's never the goal with me when I drink, it's not all that surprising that I've never done one. Plus there's just something about that much raw alcohol that's off-putting for me.

No matter what happens, I'll ALWAYS be a red wine kind of guy. Here's hoping there's something to the French paradox.