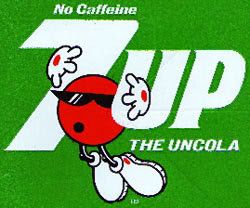 I had this terrible craving for pop last night at 11pm. We had nothing in the house but flat Hy-Vee brand grape pop that was left over from Halloween and there was no way I was going to drink that. I toyed around with the idea of going out to the grocery store and getting some, but really, it's was late and I was tired (as was evidenced by last night's crank filled post) so I ended up pacifying myself with Emergen-C. What I was really after was the carbonation and that did nicely in a pinch.

There was a time when I was in college that I found myself completely and utterly obsessed with Diet 7-Up. This is kind of strange because really, to crave 7-Up at all brings up questions of not only your mental health but also your physical health. The reason for this is because for me, the connection between consuming 7-Up and being ill is a very strong one. Growing up, the only time I drank 7-Up was when I was sick. It was never a drink of choice, but one that was foisted upon you in your unhealthiest of times.

But yes, I was once, very briefly, obsessed with Diet 7-Up. It was 1993 and I was living in the dorms at Iowa and I would walk up to Osco Drug in the cold and snow to buy two-liters of Diet 7-Up and put it in my dorm fridge. I loved the carbonation. As I alluded to previously, it's the carbonation that I really love about pop, not the sugar or the caffeine (although the caffeine definitely comes in handy from time to time.) I have more or less given up on diet pop now due to aspartame and I can't drink regular pop that much unless I want to be as big as a house. But back then, I drank pop like crazy.

I've probably mentioned here that when I was in college, I journaled like crazy. I distinctly remembered journaling about Diet 7-Up. I was right. Here it is.

7-Up is the newest rage. I'm drinking it like it's going out of style. Maybe I should call home and tell them to send me about 48 cases of it because I love it so much. And I determined the other day that there is sufficient difference between Sprite and 7-Up so as to validate my hatred of Sprite and love of 7-Up. And I love Diet 7-Up even more, although I fail to understand what's in it. No calories, no sugar, no fat, nothing but 392 mg of sodium in the whole 2 Liter bottle. It's also very acidic, much carbonation.

Written proof that even back then I was in love with the dissolved carbon dioxide!

That's probably the only excerpt I'll ever post from my college journals. The angst factor alone would probably break the Internet if I ever posted more. Plus the fact that I'd probably never be able to show my face again spares you all from more of that. There are parts of those that even I can't read anymore! I've been tempted to do retro posts and repost something from those journals on the date that I wrote them, but every time I go to do it, I decide against it and really, I think it's best that way.
Posted by Dan at 11/11/2010 11:14:00 PM