Fandom is an interesting phenomenon. Even as diehard of a Madonna as I am, I'm still pretty tame compared to some. All you have to do is head over to a message board and you'll see that, despite my ability to talk about nearly any aspect of her career, I am clearly not as obsessed as some of the fans. My friend Kelly once said that you haven't really experienced something until you've dipped into an obsession. While I think that's true, my view on that has softened significantly as I have gotten older. And after watching the documentary For the Love of Dolly tonight, I'm more convinced than ever that fandom is one of those things that can go from charming to downright creepy in 3 seconds or less. 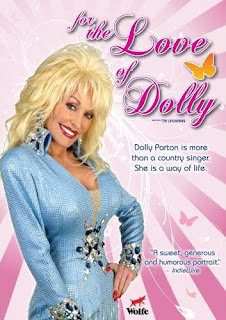 For the Love of Dolly is a 2006 documentary that follows five extremely avid fans of Dolly Parton - and that is putting it mildly. They have gone beyond the usual collecting of her music and movies and interest in her projects. These people live and breathe Dolly. Their homes are filled with Dolly memorabilia. Dolly dolls, posters, records and CDs adorn the walls and shelves. One of the fans sports a tattoo of Dolly's autograph. They've saved the clothes that they were wearing the first time they met Dolly. Dolly has signed a wide variety of items that they proudly display under glass cases. One wanted to drain their backyard swimming pool to have a portrait of Dolly painted on the bottom. They have made it their life mission to follow Dolly. And they gather annually in Pigeon Forge, TN for the Dolly Parade, an event for which Dolly serves as the grand marshal. They long for just an acknowledgment from Dolly and since they have been so persistent, they usually get it which just serves to fuel the obsession.

I'm not quite sure what the intent of this documentary was, but if it was to portray these five fans in a positive light, it missed the mark by about 100 miles. Rather than understanding the reasons for this level of devotion, I found myself saying to myself throughout the 60 minute documentary "These people need help. Professional help."

I get that these people took a great deal of personal inspiration from Dolly. I think Dolly herself would appreciate that. But when someone goes and creates a life-size replica of Dolly's Tennessee Mountain Home cabin in their backyard complete with dolls representing Dolly and her childhood best friend Judy Ogle, I think it's safe to say that things have gone a little overboard. And when you add in the fact that to make this cabin replica, the fan took a piece of wood from the Tennessee Mountain Home cabin at Dollywood and TOOK THE WOOD TO HOME DEPOT TO HAVE IT COLOR MATCHED, you've crossed a line that I can't even come close to. It's one thing to be a fan, it's quite another to let said fandom take over your life.

I thought I had seen everything, but the scene in which two of the fans track down a car owned by Judy Ogle that had been sold back to a dealer really took the cake. They scoured the car for Dolly's hair. They were obsessed with the fact that Dolly had ridden in the passenger's seat. They LICKED the seat belt. Even my 8 year-old recognized the batshit craziness - her comment was "Yuck, Dad! That has DNA on it!"

I really do love Dolly and her music. I have been a fan of hers since I was a kid and was a fan before I even knew that I was a fan. I'm also a fan of a lot of other artists and celebrities. A friend of mine is fond of saying that if you don't have passions, you're a little bit untrustworthy and I mostly agree with that. But these people? I'd be backing away slowly from them. They scared me with their level of devotion. And if I were Dolly, I would be putting out a restraining order on them. But since she's Dolly, she doesn't and she meets them and signs whatever random crap they've brought and accepts their handwritten crazy stalker notes.

Maybe it's just me, but I'm one that likes to keep the objects of my fandom at a comfortable distance. In the end, they are just people like you and me - they just happen to be famous. And I think that if I got too close, the illusion would be shattered and well, I kind of like the illusions I have built up around some of my favorite artists. I have no desire to meet Madonna - she'd likely be bitchy! Don't get me wrong, I understand the devotion but I feel like fans that tip into obsession have really lost sight of reality and end up putting a lot on the celebrity that isn't really there to begin with. What killed me the most was how these folks assumed a personal relationship with Dolly. I suppose if that delusion helps them get through the day, well, more power to them but not being able to see the folly in that is quite dangerous. Somewhere, somehow, the balance was lost.

All I can say is that if I ever tell a potential employer that I need a flexible schedule to be able to follow Dolly Parton around, someone please organize an intervention.